The Big Beat: Rock Music In Australia 1978 - 1983 through the pages Of Roadrunner magazine 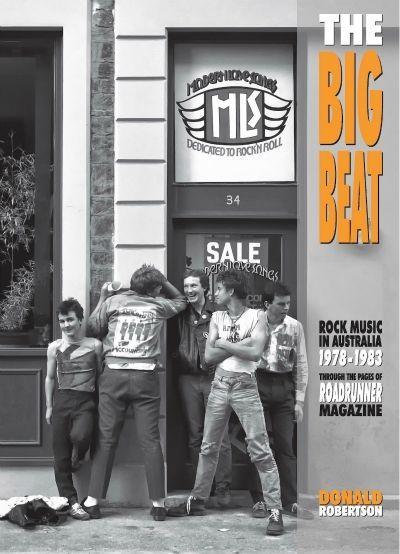 The Big Beat: Rock Music In Australia 1978 - 1983 through the pages Of Roadrunner magazine

Climb on board as an Adelaide punk fanzine blossoms into a well-loved national music magazine that chronicles the glory days of Australian post-punk and ‘pub rock’ music. A year-by-year history of the magazine by the editor, Donald Robertson, introduces a selection of over four hundred fully indexed pages from the original issues.
Featured artists include The Angels, Australian Crawl, Boys Next Door (and The Birthday Party), The Church, Cold Chisel, The Dagoes, Flowers (and Icehouse), The Go-Betweens, The High Rise Bombers, The Hitmen, Hunters and Collectors, INXS, Jo Jo Zep and the Falcons, Paul Kelly and the Dots, Laughing Clowns, Manikins, Mental as Anything, Midnight Oil, Mi-Sex, Models, Mondo Rock, The Moodists, New Race, No Fixed Address, The Numbers, Pel Mel, The Radiators, Radio Birdman, Redgum, The Reels, The Riptides, The Saints, Sardine v, The Scientists, Skyhooks, Split Enz, The Sports, Stiletto, Sunnyboys, The Swingers, Tactics, Terminal Twist, The Thought Criminals, The Triffids, Two Way Garden, The U-Bombs, Voigt/465, Dave Warner’s From the Suburbs, Whirlywirld, XL Capris, Young Modern and →↑→
Published in a limited hard cover edition of 500 copies. Part of the proceeds from the book will go to the music industry charity Support Act.
$99.00Add to basket ›