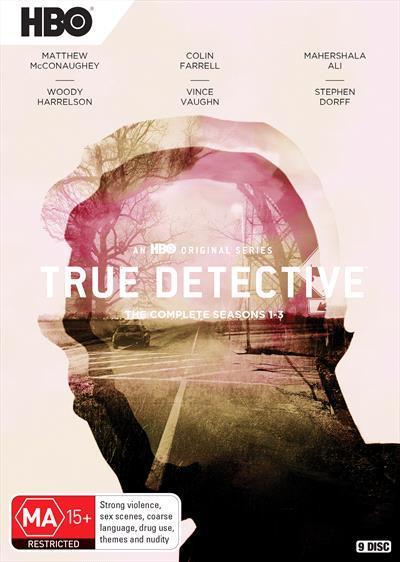 SEASON ONE
Partners Marty Hart (Woody Harrelson) and Rust Cohle (Matthew McConaughey) are assigned to investigate a macabre murder by a killer with a disturbing occult obsession. As they attempt to uncover the secrets of this bizarre crime, their own lives collide and entwine in unexpected, sometimes catastrophic ways.
SEASON TWO
A chilling murder brings together three law enforcement officers and a career criminal (Vince Vaughn). After discovering the crime scene, motorcycle cop Paul Woodrugh (Taylor Kitsch) is thrust into the path of a County Sheriff (Rachel McAdams) and compromised detective, Ray Velcoro (Colin Farrell). As the case grows broader and darker it forces the participants to face their own inner demons, while navigating a web of conspiracy and betrayal in the scorched landscapes of California.
SEASON THREE
A story of obsession: Arkansas detective Wayne Hays (Mahershala Ali) spends decades investigating the crime that changed his life–the murder of a young boy and the disappearance of the boy’s sister–as the HBO drama slips between three separate time periods in 1980, 1990 and 2015.