So What: The Life of Miles Davis 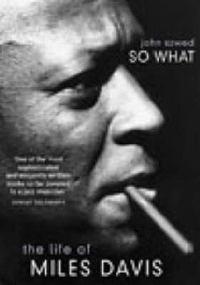 So What: The Life of Miles Davis

Miles Davis was one of the crucial influences in the development of modern jazz. His Kind of Blue is an automatic inclusion in any critic’s list of the great jazz albums, the one record people who own no other jazz records possess, and still sells 250,000 copies a year in the US alone. But Miles regularly changed styles, leaving his inimitable impact on many forms of jazz, whether he created them or simply developed the work of others, from modal jazz to be- bop, his seminal quintet and his big-band work, to the jazz funk experiments of later years. Miles not only knew and worked with everyone who was anyone in jazz, from Coltrane to Monk, he was a friend of Sartre’s, lover of Juliette Greco and musical collaborator with musicians who ranged from Stockhausen to Hendrix. John Swzed is uniquely well-qualified to do justice to Miles, both in terms of his impact on jazz, and as one of the great Black Americans: as political figure, icon and archetypal cool dude. His book fills in the gaps left by myth-making about Miles' life- both by Miles himself and by his previous biographers- telling the story of his childhood, his depressions and his relationship with heroin as well as the more familiar public career.