The Blues Man: 40 Years with the Blues Legends: The Life and Times of Melvyn Deacon Jones 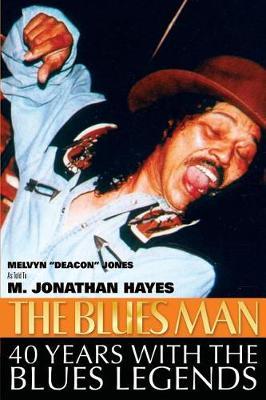 The Blues Man: 40 Years with the Blues Legends: The Life and Times of Melvyn Deacon Jones

MELVYN DEACON JONES started his long hard road in Richmond, Indiana before moving on to Chicago with Baby Huey and the Babysitters from 1961 to 1969. He joined Curtis Mayfield in 1969 until 1972, and Freddie King in the fall of 1972 until Freddie’s untimely death at age 42 in December of 1976. In 1978, Deacon started 18 years with the Boogie Man, John Lee Hooker. During his 40 year career Deacon Jones has jammed with Muddy Waters, Eric Clapton, Joe Cocker, Carlos Santana, Noel Redding, Stevie Ray Vaughan among others. He has worked for and recorded with Elvin Bishop, Eddie Money, Lester Chambers, Dr. John, Gregg Allman, Buddy Miles, Mick Fleetwood, Albert Collins, Robert Cray, Johnny Clyde Copeland, Hank Ballard, Marva Wright, Benny Turner, Harold Jones, Katie Webster and Lydia Pense. Today Deacon plays all over the world with his band, the Bucket of Blues Band. This book sets out Deacon’s recollections of life on the road with the Blues Legends - 40 years - and that’s a lot of road. Read his stories from the highest of the high with Freddie King in packed Madison Square Garden, or the week he spent as MC at the Apollo in Harlem, to the lowest of the low when he spent a month in jail because the promoter forgot to pay the rental car fee.