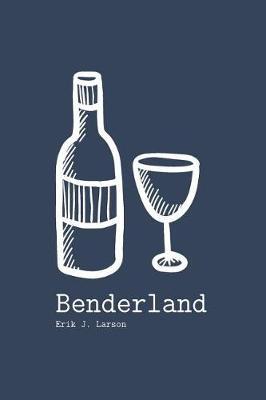 JACOB JAKE MOORE is a thirty five year old founder and head of a software startup in Palo Alto, California, whose life is spinning out of control after a divorce. He’s in the grips of an addiction to alcohol that threatens his company fortunes, his relationships and, ultimately, his life. As the story begins Moore is leaving or discharging from a rehabilitation center for drug and alcohol abuse in Scott’s Valley, California, known as The Camp. His girlfriend of one year, a beautiful, twenty six year old super-model type of Russian-known only as The Girl in the novel-has unceremoniously dumped him with a brief text message sent the night before his release. Moore goes on a bender, as he calls it, an adventurous romp from city to city while perpetually imbibing. In Benderland, Moore has a viciously good time, it would seem, even as he painfully recounts the morning experiences of a drinker and reveals an impressive, almost humorous command of the medical and scientific issues surrounding alcoholism. His first stop fresh out of The Camp is back in Palo Alto, where he pops into a bar once frequented with his advisor MICKEY-a millionaire software entrepreneur who splits his time between Palo Alto and Portugal. In the bar we learn more about Moore’s history, his relationships… and his obsession with women. Meeting women in Benderland is what Moore calls a vignette -a little slice of poignant yet ephemeral experience one can have when traveling in Benderland. Yet in spite of their evanescent nature, his vignettes paint pictures of the beauty of human interactions and the magical qualities of young women: their dreams, their desires, and their charm for him.