Trapped: The Complete Series 1 and 2 (DVD) 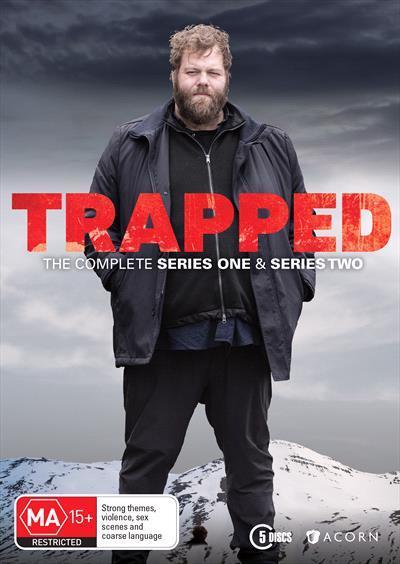 Trapped: The Complete Series 1 and 2 (DVD)

The Complete Series One: In a small town at the bottom of a beautiful fjord in the northeast of Iceland, an innocent girl died in a mysterious fire. Andri Olafsson is a seasoned cop who moved here, the middle of nowhere, for the sake of his ex-wife and two daughters. A ferry from Denmark carrying 150-passengers pulls into the small port. A mutilated and gorged body is discovered by the shore. It’s a man, unidentifiable, a torso floating among the ice. Andri examines the body, there must be a murderer on that ferry. A storm becomes a blizzard, the road out of town becomes impassable. Order disintegrates into chaos as the passengers and the residents realise, they are all either possible suspects or possibly in danger. Features 10 Episodes
The Complete Series Two: The Minister of Industry in the Icelandic Parliament in Reykjavik is walking the square to attend a meeting when someone calls out her name. It’s a man - wet from top to toe smelling of gasoline. Before the minister realises what to do the man grabs her and sets fire to both of them. Andri Ólafsson who now has become the Head of Police Investigation in Reykjavík is called in to investigate. The man is dead, but the minister is rushed to a hospital with 2nd. Degree burns. Andri is under pressure from the Prime Minister and the Government who think this might have been an act of terrorism as there are currently some very controversial things connected to an expansion of a power plant near the town of Siglufjörður. Features 10 Episodes
$59.95Add to basket ›