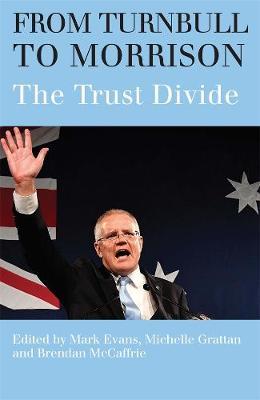 Is trust between the government and Australians broken? The country’s leading institutions have been ranked among the least trusted in the world at a time when the economy has experienced twenty-seven years of economic growth. This has all happened since the 2016 federal election under the revolving prime ministerships of Malcolm Turnbull and Scott Morrison’s first term.
Turnbull was the fourth sitting prime minister in a decade to be removed by his own party. What role do these politically turbulent times play in this trust deficit? Scott Morrison has now been elected by the people. What does he and future prime ministers need to do to reboot civic belief in politics? How will history judge the contribution of the Turnbull and Morrison administrations?
In From Turnbull to Morrison well-known political journalists including Michelle Grattan, George Megalogenis, Megan Davis, Virginia Haussegger, Mark Kenny and Katharine Murphy and leading academics such as Frank Bongiorno, Mark Evans, Susan Harris-Rimmer, Anne Tiernan, John Warhurst and George Williams examine the institutions, the issues and the leaders at the heart of this crisis.
It is crucial reading for champions of liberal democracy.
From Turnbull to Morrison – The Trust Divide is the thirteenth volume of Australia’s longest running study of Australian Commonwealth Government, started in 1983.
$39.99Add to basket ›