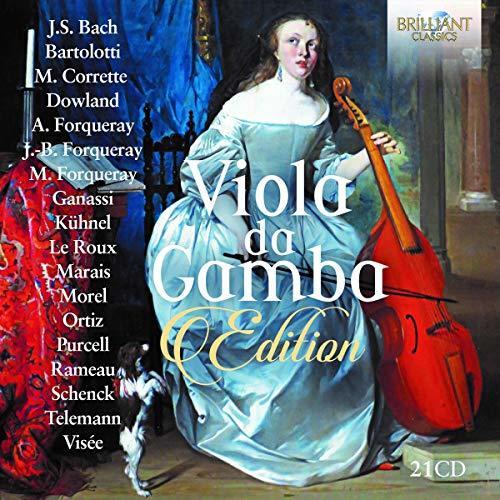 This extensive set celebrates the vast repertoire of viola da gamba music and explores its contribution to the European musical landscape, from how it was moulded to fit the tastes of different countries, to its evolution in musical styles during the Renaissance, Baroque and Classical eras.
The viola da gamba descends from the medieval fiddle, and the first viol dates from the 15th century. At first it was held sideways, like a guitar, then inspired by the playing style of Arab rebab musicians, Europeans began holding their instruments upright between the legs and thus the viola da gamba, or ‘leg-viol' was born. For the next three centuries the viola da gamba repertoire flourished and composers throughout Europe were drawn to the instrument because of its rich tone and versatile range which allowed for expressive variety. Unique for its time, the viola da gamba could act as a solo instrument or in different roles as part of an ensemble; as the melodic lead or bass accompaniment, for example. This set takes us on a whirlwind tour of Europe from the 16th to the 18th centuries and features concertos, chamber music, viol consorts and solo pieces.
The set begins in England with the first CD dedicated to John Dowland’s work, Lachrimae. Next, we move to Italy, where composers channelled their efforts into writing extroverted concertante music for string ensembles, before touching on treatises by Venetian-born Silvestro Ganassi and Spanish composer Diego Ortiz. Their works represent the earliest collections of music composed exclusively for the gamba. The greatest gamba composers are accorded plenty of space in the set. Marin Marais appears on four CDs, three of which are wholly dedicated to the French composer, and certainly anyone who has watched the film Tous les matins du monde will recognise some of the tracks. A different strand of French talent features in the Pièces de viole collection by Antoine Forequeray and his son Jean- Baptiste. Far from the restrained elegance of Marais, the Forequeray’s music delights in passion. Antoine was famous for his dramatic and brash playing style, and the collection is widely accepted to be the most virtuosic in the viola da gamba repertoire. As well as the opportunity to revel in the works of celebrated composers such as J.S. Bach, Purcell and Telemann, the set also showcases the work of lesser-known composers including Johannes Schenck, Angelo Michele Bartolotti and Jacques Morel, whose complete gamba music closes this set.
In its entirety, the set reveals the viola da gamba as an extraordinary instrument capable of emotional depth and versatility, as composers throughout the centuries have sought to realise its potential and thereby their own artistic vision.
A tribute to the Viola da Gamba, which for a long period of time was the most important and popular string instrument in use. Its Golden Age was the Renaissance and Early Baroque, it was succeeded in the 18th century by the stronger violoncello.
The Viola da Gamba is an instrument with six strings, played while held between the knees (Gamba is Italian for knee). Its sweet, slightly nasal and rich sound has a unique speaking quality, able to express all human emotions, but particularly those of a melancholy or sad nature.
This Edition offers an extensive survey of music written for Viola da Gamba, by composers who were often virtuosos on the instrument: Marias, Kühnel, the Forqueray family, Schenck, Leroux, Ortiz, Ganassi, Corrette, Rameau, Telemann, Bach and Purcell. The set begins with probably the most beloved and moving work for Viola da Gamba Consort: the Lachrimae (Tears) by John Dowland.
Played by the foremost Viola da Gamba players of our time: Cristiano Contadin, Rainer Zipperling, Bettina Hoffmann, Patxi Montero, Lixsania Fernández, and others.
A worthy tribute to a nearly forgotten instrument, which gained a renewed public interest by the successful film about Marin Marais: “Tous les matins du monde”.
$69.99Add to basket ›