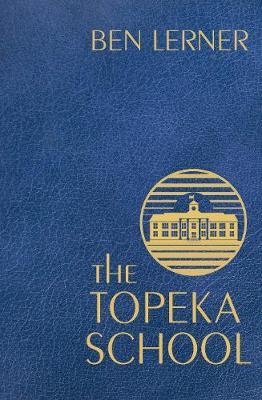 Adam Gordon is a senior at Topeka High School, class of ‘97. His parents are psychologists, his mom a famous author in the field. A renowned debater and orator, an aspiring poet, and - although it requires a lot of posturing and weight lifting - one of the cool kids, he’s also one of the seniors who brings the loner Darren Eberheart into the social scene, with disastrous effects.

Deftly shifting perspectives and time periods, The Topeka School is a riveting story about the challenges of raising a good son in a culture of toxic masculinity. It is also a startling prehistory of the present: the collapse of public speech, the tyranny of trolls and the new right, and the ongoing crisis of identity among white men.
'A novel of exhilarating intellectual inquiry, penetrating social insight and deep psychological sensitivity…the future of the novel is here’- Sally Rooney

I’ll start out by saying that The Topeka School is one of my favourite novels of the year. I was already a fan, having loved his previous two novels, Leaving the Atocha Station and 10:04. Like these two works, The Topeka School features Adam Gordon, and can also be viewed as a work of auto-fiction. It is impossible to say what is ‘real’ in this novel, but it is safe to say that much of it is based on Lerner’s youth: Gordon is growing up in Topeka, his parents are both psychoanalysts working and conducting research at The Foundation, a kind of ‘Mayo clinic for the mind’. Interestingly, Lerner’s mother is the writer Harriet Lerner, who is most famous for her book The Dance of Anger. The narrative flicks between Adam, his parents Jonathon and Jane, and there are brief italicised passages that follow Darren – one of the ‘lost boys’ treated at the Foundation.

As the narrative rotates between these protagonists, we go back and forward in time, the events of the past illuminated by a known future. This can be dislocating for the reader at first, but it all clicks satisfying into place as the narrative unfolds. Lerner layers the narrative with themes – anger, psychoanalysis, meaning and use of language – using repetition of imagery as events unfold and ripple across the character’s lives.

Set in the late 1990s, this book’s primary focus is on anger, specifically the anger felt by Gordon and his classmates: young white males, the sons of doctors and lawyers, who in theory should have nothing to be angry about. The town of Topeka is also famous for the Phelps family, the Westboro Baptist Church, which has its own brand of toxic hate and serves as a dark and ever-present shadow in the novel. And this is what’s outstanding about this novel, how Lerner is able to focus in on this small town, a small collection of characters, and in a relatively slight novel illuminate the broader American malaise in an utterly original way.