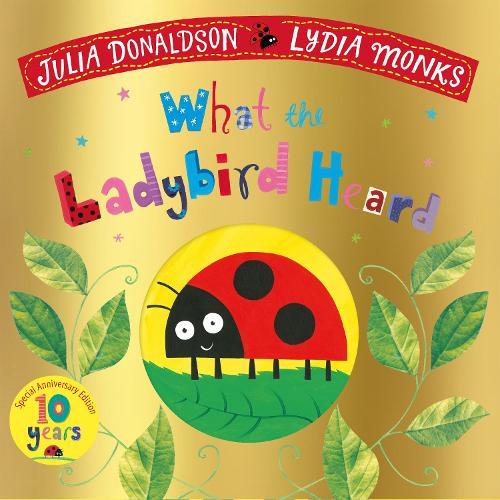 Celebrate ten years of farmyard fun with this special anniversary edition of What the Ladybird Heard, featuring a big glittery ladybird looking out from a hole in the shiny gold cover! And the ladybird said never a word. But the ladybird saw, And the ladybird heard … When the ladybird overhears Hefty Hugh and Lanky Len planning to steal the farmer’s fine prize cow, it’s up to her - the smallest, quietest creature on the farm - to stop the thieves … This rhyming farmyard adventure features two bungling robbers, one clever little ladybird - and lots of animal noises! Join in the fun with What the Ladybird Heard 10th Anniversary Edition. With bright, distinctive illustrations and glitter on every page, this special edition also has bonus material from Julia Donaldson and Lydia Monks, including a letter from the author and never-before-seen pictures from the illustrator’s sketchbook.