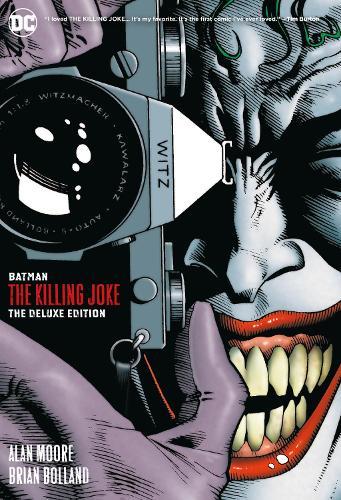 Batman - The Killing Joke is Alan Moore’s unforgettable meditation on the razor-thin line between sanity and insanity, heroism and villainy, comedy and tragedy.
One bad day is all it takes according to the grinning engine of madness and mayhem known as the Joker, that’s all that separates the sane from the psychotic. Freed once again from the confines of Arkham Asylum, he’s out to prove his deranged point. And he’s going to use Gotham City’s top cop, Commissioner Jim Gordon, and the Commissioner’s brilliant and beautiful daughter Barbara to do it.
$29.99Add to basket ›

Critically acclaimed writer Alan Moore redefined the superhero with Watchmen and V for Vendetta. In Batman: The Killing Joke, he takes on the origin of comics' greatest super-villain, The Joker, and changes Batman's world...

A gripping, atmospheric novel about obsession and love in war-time Vienna

The incredible true story of the death of Jimmy Hoffa, the most famous hit in Mafia history.

Chronicles the joys and sorrows of the four March sisters as they grow into young ladies in mid-nineteenth-century New England. Includes movie stills from the 2019 feature film directed by Greta Gerwig.