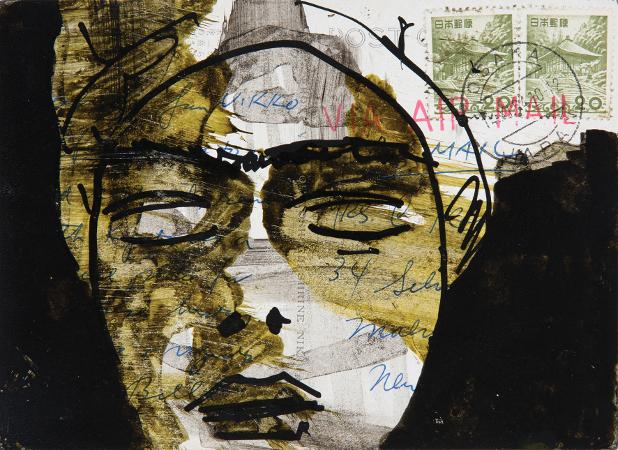 Award-winning artist Marco Luccio returns to fortyfivedownstairs for a third time with his latest exhibition-NEW YORK POSTCARDS-featuring over 150 works in varying mediums including ink, acrylic, and drypoint, composed on original postcards collected in New York.
An exhibition over ten years in the making, Luccio began collecting used postcards from New York’s flea markets, museums, antique and second-hand shops on his first trip to the city. In the artist’s words, he was drawn to their ‘beautiful, tactile and fragile beauty' and the stories they conveyed as ‘precious intimate artefacts and remnants of the past'. While Luccio confesses that working over the hand-written messages often felt like ‘vandalism', the final result is ultimately both a preservation and elevation of ephemera into enduring art. One piece features over 100 postcards in one frame, creating a monumental mosaic representing aspects of civilisation and art history through striking and memorable imagery.
Visitors to NEW YORK POSTCARDS with a penchant for mysteries will receive an extra treat in the small gallery, which is hosting a second Luccio exhibition-IMMAGINARIO-a series of monotypes. A departure from Luccio’s recognisable cityscapes, IMMAGINARIO explores new landscapes and realms, showcasing the diversity of his artistic practice.
$35.00Add to basket ›

END_OF_DOCUMENT_TOKEN_TO_BE_REPLACED

In An Australian Light: Photographs from Across the Country