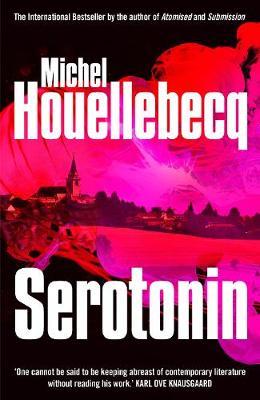 LONGLISTED FOR THE 2020 INTERNATIONAL BOOKER PRIZETHE MOST IMPORTANT FRENCH BOOK OF THE YEAR___________________‘One cannot be said to be keeping abreast of contemporary literature without reading Houellebecq’s work.’ Karl Ove Knausgaard, New York TimesDissatisfied and discontent, Florent-Claude Labrouste feels he is dying of sadness. His young girlfriend hates him and his career as an engineer at the Ministry of Agriculture is pretty much over. His only relief comes in the form of a pill - white, oval, small. Recently released for public consumption, Captorix is a new brand of anti-depressant which works by altering the brain’s release of serotonin.Armed with this new drug, Labrouste decides to abandon his life in Paris and return to the Normandy countryside where he used to work promoting regional cheeses, and where he had once been in love. But instead of happiness, he finds a rural community devastated by globalisation and European agricultural policies, and local farmers longing, like Labrouste himself, for an impossible return to what they remember as the golden age.Written by one of the most provocative and prophetic novelists of his generation, Serotonin is at once a devastating story of solitude, longing and individual suffering, and a powerful criticism of modern life.