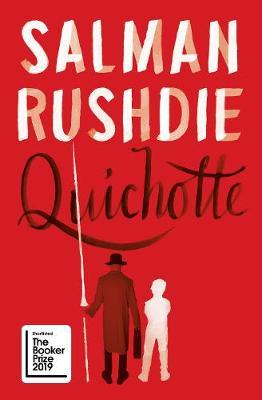 In a tour-de-force that is both an homage to an immortal work of literature and a modern masterpiece about the quest for love and family, Booker Prize-winning, internationally bestselling author Salman Rushdie has created a dazzling Don Quixote for the modern age.

Inspired by the Cervantes classic, Sam DuChamp, mediocre writer of spy thrillers, creates Quichotte, a courtly, addled salesman obsessed with television, who falls in impossible love with a TV star. Together with his (imaginary) son Sancho, Quichotte sets off on a picaresque quest across America to prove worthy of her hand, gallantly braving the tragicomic perils of an age where “Anything-Can-Happen”. Meanwhile his creator, in a midlife crisis, has equally urgent challenges of his own.
Just as Cervantes wrote Don Quixote to satirise the culture of his time, Rushdie takes the reader on a wild ride through a country on the verge of moral and spiritual collapse. And with the kind of storytelling magic that is the hallmark of his work, the fully realised lives of DuChamp and Quichotte intertwine in a profoundly human quest for love and a wickedly entertaining portrait of an age in which fact is so often indiscernible from fiction.

This book is one wild ride: a hectic riffling through the back catalogue of literature, a throwing of books into the back seat of an unglamorous car, and a helter-skelter drive across an America heaving and straining under the forces that gleefully assemble to tear it apart. Salman Rushdie’s Quichotte is, yes, a re-writing of Cervantes’ Don Quixote, set in current-day America and starring, like the original, an elderly gent deranged by TMS (too many stories) Syndrome. Rushdie’s Quichotte has had his mind discombobulated not by an oversupply of tales of chivalry and knights-errantry, but by an over-viewing of daytime and reality TV. Our new Sancho is not a faithful retainer but Quichotte’s phantom son, a quest for filial contact reminding this reader of Rushdie’s 1990 Haroun and the Sea of Stories. This book, like that one, is a picaresque adventure tale, tumbling freely from one madcap episode to the next.

As with Cervantes, the writer of Quichotte’s story also makes it into Rushdie’s book, as the character Brother. His story is given its own chapters and we observe how Brother’s life (estranged sister, prodigal son, etcetera) mirrors and shapes Quichotte’s. This doppler structure gives Rushdie a rich vein to work in terms of implied and overt observations regarding written fictions and the fictions within which we live.

Quichotte is both joyous and deeply melancholy in its treatment of familial relations and the state of the union. It steers vertiginously between despair for a broken world and hope for the possibility of forgiveness and love amongst the pieces. Quichotte is a dance to the crazy syncopation of an America lumbered with an idiot president, manic lying (‘errorism’), and a plague of opioids. There’s an awful lot to like in this overstuffed armchair, this elegant echo-chamber, this polyglot, messy, infinitely literate book.

Memoirs of a Fox-hunting Man