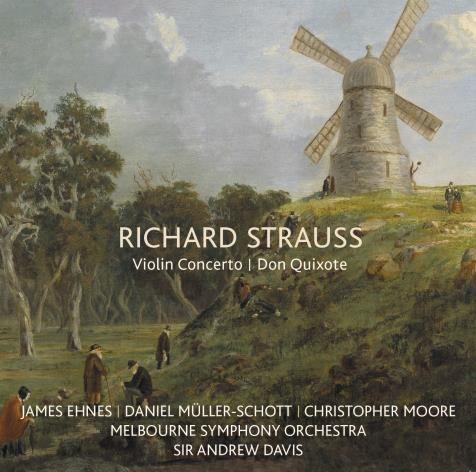 James Ehnes, Daniel Müller-Schott, Christopher Moore, Melbourne Symphony Orchestra, Sir Andrew Davis - Strauss: Don Quixote / Violin Concerto (CD ALBUM (1 DISC))
The Melbourne Symphony Orchestra and their Chief Conductor Sir Andrew Davis continue their acclaimed survey of the orchestralmusic of Richard Strauss, with this latest volume featuring three world-class soloists -James Ehnes, Daniel Müller-Schott and Christopher Moore -performing two of his finest early works: the Violin Concerto, and the tone poem Don Quixote.
Performed here by dual Grammy Award-winning Canadian violinist James Ehnes, Strauss’s Violin Concerto is a beautiful and inventive work, remarkably mature considering Strauss wrote it when he was still a teenager. Strangely seldom performed today, it is full of melody and of virtuoso fireworks, very much of its Romantic time but hinting at the recent Classical masters Beethoven and Mozart.
Don Quixote is inspired by Cervantes’s iconic novel, and Strauss demonstrates every bit of his flair for the dramatic (which would be fully realised in his great operas Der Rosenkavalier, Elektra, Die Frau ohneSchattenand Salome). With Daniel Müller-Schott’s cello representing the famous man of La Mancha, and Christopher Moore’s viola cast as his trusty sidekick Sancho Panza, Strauss takes us on an incredible journey into the mind of this deluded nobleman, and across the rustic landscape of the Don’s native Spain.
The MSO’s Strauss series was launched in 2014 with a major European tour including the BBC Proms and the Concertgebouw, and has so far included Four Last Songs with Erin Wall, Ein Heldenleben, Four Symphonic Interludes, Also sprachZarathustra, Don Juan, Till Eulenspiegel'sMerry Pranks and An Alpine Symphony. The recordings have won significant acclaim from the international press, with BBC Music Magazine describing Also sprachZarathustra as ‘a benchmark recording’.
$21.95Add to basket ›