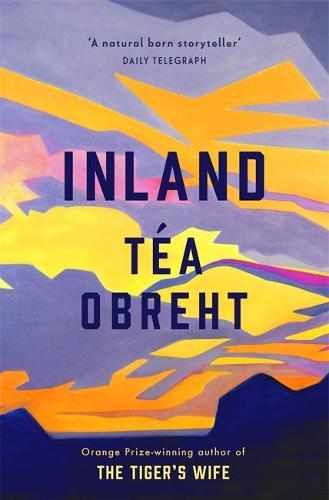 A man searching for a home he can’t find. A woman bound to a home she can’t leave.
NORA is an unflinching frontierswoman awaiting the return of the men in her life - her husband who has gone in search of water for the parched household, and her elder sons who have vanished after an explosive argument. Nora is biding her time with her youngest son, who is convinced that a mysterious beast is stalking the land around their home, and her husband’s seventeen-year-old cousin, who communes with spirits.
LURIE is a former outlaw and a man haunted by ghosts. He sees lost souls who want something from him, and he finds reprieve from their longing in an unexpected relationship that inspires a momentous expedition across the West.
Mythical, lyrical, and sweeping in scope, Inland is grounded in true but little-known history. It showcases all of Tea Obreht’s talents as a writer, as she subverts and reimagines the myths of the American West, making them entirely - and unforgettably - her own.

Many readers will remember Téa Obreht’s impressive debut novel, The Tiger’s Wife, which won the Orange Prize back in 2011. Inland is the author’s sophomore outing and Obreht once again displays a remarkable talent for blending folklore and reality. Set within the wild and drought-stricken ranges of the American frontier, this is a myth-soaked historical epic that is certain to dazzle readers anew.

The story moves between two characters who playfully subvert two traditional Western narratives: an outlaw being relentlessly pursued by the law, and a plucky frontierswoman determined to defend her family and home. Yet, Lurie – a Bosnian immigrant with a camel as his trusty steed – is no Butch Cassidy and while Nora has plenty of pluck and grit, she is far from being defined exclusively by these traits; her richly nuanced inner life reveals secret desires and fears. The world that these characters inhabit is at once original and familiar, and wholly believable. It is a place marked by awe-inspiring natural wonder and needy spirits. Both our main characters speak to the dead: Lurie is haunted by an array of ghosts, while Nora has an ongoing conversation with her dead daughter whose ghostly presence has aged alongside her.

In crafting this novel, Obreht has drawn inspiration from a little-known piece of American history. Lurie first meets his camel when crossing paths with the Camel Corps, a failed experiment by the U.S. Army to import camels for military purposes back in the 1850s and a fascinating story. The relationship that develops between man and animal is beautifully and imaginatively wrought by Obreht who always thrills on a line level. A couple of scenes in this novel stopped my heart; Inland is an evocative and immersive read.

END_OF_DOCUMENT_TOKEN_TO_BE_REPLACED

Brilliant, heartbreaking, tender, and highly original - poet Ocean Vuong's debut novel is a sweeping and shattering portrait of a family, and a testament to the redemptive power of storytelling

THE NEW NOVEL BY THE AUTHOR OF THE TIGER'S WIFE A man searching for a home he can't find. A woman bound to a home she can't leave.

Fleche (the French word for 'arrow') is an offensive technique commonly used in fencing, a sport of Mary Jean Chan's young adult years, when she competed locally and internationally for her home city, Hong Kong.   ...

Jay Bernard's extraordinary debut is a fearlessly original exploration of the black British archive: an enquiry into the New Cross Fire of 1981, a house fire at a birthday party in south London in which thirteen young black people...

If All the World and Love Were Young

Memories of going 'through the looking-glass' into the land of video games are some of the most evocative of all childhood.