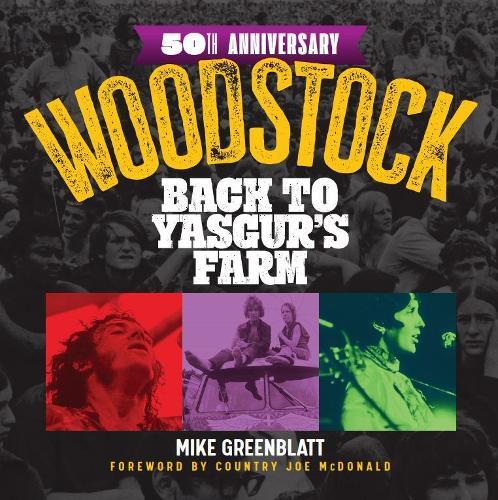 Celebrating the 50th anniversary of what Time magazine called The greatest peaceful event in history, author Mike Greenblatt gives you a front row seat to not only the most important concert in rock history but to a three-day happening that defined a generation. 1969 was the year Richard Nixon took office, Neil Armstrong walked on the moon, and on Aug. 15, 16, and 17, approximately 500,000 young people streamed into a sleepy farm in upstate New York to be part of something that promised three days of peace and music. What those who braved the trek to Max Yasgur’s 600-acre dairy farm in Bethel, N.Y., experienced was something much more. Greenblatt, a college kid in ‘69, was among the throng. He shares his story as well as interviews with Carlos Santana, Richie Havens, Graham Nash, Country Joe McDonald, Arlo Guthrie, John Sebastian, members of Creedence Clearwater Revival, Jefferson Airplane, Sly & The Family Stone, and many others who shared the Woodstock stage and shaped an event that still stirs the soul with wonder and delight. Filled with personal stories, photographs, band interviews, posters, history and joy, Woodstock 50th Anniversary is your ticket to the most remarkable concert event ever held. AUTHOR: Mike Greenblatt has been writing for Goldmine magazine for more than 35 years. His writing subjects fill the Rock and Roll Hall of Fame. He’s interviewed Joe Cocker, Graham Nash, David Crosby, Carlos Santana, Bruce Springsteen, Bob Dylan, Johnny Cash, the Rolling Stones, and countless others. He was 18 at Woodstock. In addition to writing about music, Greenblatt has worked on publicity campaigns for The Animals, Pat Benatar, Hall & Oates, Kiss, and Tommy James, among others. 200 colour images