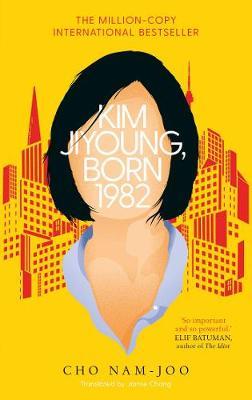 Kim Jiyoung is a girl born to a mother whose in-laws wanted a boy. Kim Jiyoung is a sister made to share a room while her brother gets one of his own. Kim Jiyoung is a female preyed upon by male teachers at school. Kim Jiyoung is a daughter whose father blames her when she is harassed late at night. Kim Jiyoung is a good student who doesn’t get put forward for internships. Kim Jiyoung is a model employee but gets overlooked for promotion. Kim Jiyoung is a wife who gives up her career and independence for a life of domesticity.
Kim Jiyoung has started acting strangely. Kim Jiyoung is depressed. Kim Jiyoung is mad. Kim Jiyoung is her own woman. Kim Jiyoung is every woman.
Kim Jiyoung, Born 1982 is the South Korean sensation that has got the whole world talking. The life story of one young woman born at the end of the twentieth century raises questions about endemic misogyny and institutional oppression that are relevant to us all. Riveting, original and uncompromising, this is the most important book to have emerged from South Korea since Han Kang’s The Vegetarian.
“This is a book about the life of a woman living in Korea; the despair of an ordinary woman which she takes for granted. The fact that it’s not about ‘someone special' is extremely shocking, while also being incredibly relatable.” Sayaka Murata, author of Convenience Store Woman

When Kim Jiyoung starts exhibiting bizarre behaviours, her husband takes her to a psychiatrist. What follows is a succinct account of Jiyoung’s life, from birth to elementary school, from the office to her days at home caring for a small baby. Throughout, she comes up against persistent sexism.

There is nothing extraordinary about what happens to Jiyoung in this novel: a laughing remark by a doctor in response to a birth injury; a lecture from her father for her ‘short skirt’ after a young man hassles her on the way home from school; being passed over for a promotion at work in favour of a male colleague. But there is something unnerving about the event’s dispassionate narration, and as the incidents pile up over the years, a feeling of claustrophobia intensifies, building to a bleakly ironic conclusion.

It’s immediately apparent when reading this work that Jiyoung has been constructed as a kind of ‘millennial everywoman’. Author Cho Nam-joo has said she wished to show what ordinary life looked like for women in South Korea by emphasising common experiences instead of depicting extreme circumstances. This effect is achieved in part by the inclusion of elements of autobiography and documentary into the work.

The English language version of Kim Jiyoung, Born 1982 (from translator Jamie Chang) also comes to Australian readers with a fascinating backstory. This novel sparked an incredible response upon its initial publication in South Korea where it has sold more than a million copies. Hailed as a groundbreaking feminist work, its even-tempered yet candid critique of the entrenched gender discrimination in modern South Korean society resonated strongly with many readers, while also attracting vehement hatred from others. This is not just a story for South Korea however; Jiyoung’s struggles against misogyny will unfortunately be all too familiar to non-Korean readers and this slim, deft and slightly strange novel leaves a bitter aftertaste.