What Do We Need Men for?: A Modest Proposal 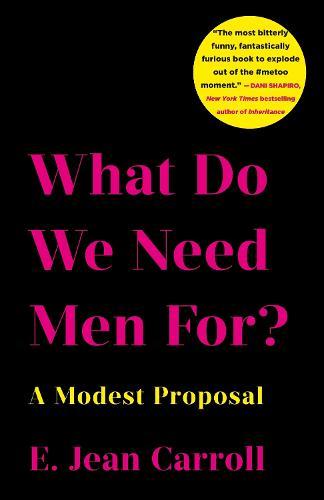 What Do We Need Men for?: A Modest Proposal

E. Jean Carroll is possibly the liveliest woman in the world and author of ‘Ask E. Jean’ in Elle Magazine. When she realised that her eight million readers and question-writers all seemed to have one thing in common - problems caused by men – she hit the road.  Criss-crossing the country with Lewis Carroll (her blue haired poodle), E. Jean stopped in every town named after a woman between Eden, Vermont and Tallulah, Louisiana to ask women the crucial question: What Do We Need Men For?
E. Jean gave her rollicking road trip a sly, stylish turn when she deepened the story and created a list called The Most Hideous Men of My Life. She began to reflect on her own, sometimes dark history with the opposite sex. What advice would she have given to her past selves – as Miss Cheerleader USA and Miss Indiana University? Or as the fearless journalist, television host and eventual advice columnist she became?
E. Jean intertwines the stories of the outspoken people she meets on her road trip with her own history of bad behaviour. From mafia bosses, media titans, boyfriends, husbands, a serial killer and others, she creates a decidedly dark yet hopeful, hilarious and thrilling narrative. Her answer to the question What Do We Need Men For? will shock men and delight women.
$41.99Add to basket ›