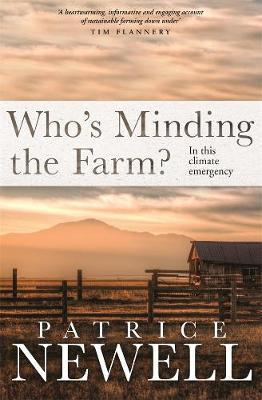 In an era of rapid climate change, this vital account of how agriculture can address major issues is an Australian story with global ramifications. Patrice is at the frontline of enormous challenges, from water scarcity and land stewardship to food security and the rural-urban divide. The devastation of drought and the crises created by industrial-scale chemically-dependent primary production are discussed and alternatives proposed – along with bold ideas for new sources of energy.
Patrice has travelled the world exploring best practice and invested heavily in organic methods on her farm. She believes we can produce enough good food to feed the world without further environmental wreckage or loss of bio-diversity. With glimpses of the individuals who make working the farm so rewarding, her book provides a window into the pains, pleasures and politics of life on the land, and promotes new ways of thinking, no matter where you live.
Who’s Minding the Farm? A shared responsibility for us all.

Let’s face facts: industrial agriculture is about to come to a grinding halt. We know well what overgrazing and inappropriate crops have done to Australian soils: erosion, salinity, drought and flood are the common results. Ploughing in vast quantities of industrially produced fertilisers, pesticides and herbicides on our broad-acre monoculture crops may have given us the Green Revolution, but it has done nothing for soil health. A few years back the UK environmental secretary said that due to loss of topsoil and poor soil health, the UK only has about 100 harvests left. No one seems to be talking about how many harvests Australia has left; a country with soils far less nutrient-rich than the UK’s.

Patrice Newell is the latest in a line of Australian farmers to broach the topic of restoring soil quality and bringing people back into contact with the land. After a successful career as a model and television presenter, Newell and her husband (ABC Radio National’s Phillip Adams) bought a 4000 hectare farm in the Hunter Valley. By farming with nature, rather than against it, Newell is slowly healing her land from the two hundred years of abuse and neglect of a settler colonial mindset that sees land as something to be exploited, not cared for. The property is now a successful biodynamic farm producing garlic, olives, beef and honey.

Throughout Who’s Minding the Farm? Newell offers a critical appraisal of our current fossil-fuel powered agricultural and industrial systems. More than criticisms, however, Newell offers a multitude of suggestions as to how we can make nutrient-rich and healing foods right here in Australia by restoring healthy soil and improving our agricultural practices. Moreover, Newell suggests that by using local, holistic knowledge, and by encouraging more young people back onto the land, regenerating the land will also mitigate the effects of climate change by storing carbon in the soil.