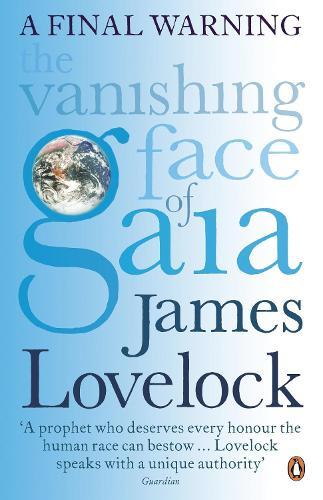 James Lovelock’s The Vanishing Face of Gaia- A Final Warning is a prophetic message for mankind from one of the most influential scientists of our age. James Lovelock’s Gaia theory, the idea that our planet is a living, self-regulating system, has transformed the way we see our planet and what is now happening to it. In this book he distils a lifetime’s wisdom and observation of the Earth to reveal the rate at which our climate is altering, how conventional ‘green’ measures are not working, and how life as we know it is going to change forever. Only Gaia, he shows, can help us fully understand this, and prepare us for the future. ‘The most influential scientist and writer since Charles Darwin’ Irish Times ‘Supremely life-affirming … The definitive statement of the Gaia theory and its implications for the future’ John Gray, Literary Review ‘Exhilarating … Lovelock is the closest thing we have to an Old Testament prophet’ John Carey, Sunday Times ‘Gripping, convincing and indeed terrifying’ Michael McCarthy, Independent ‘Lovelock’s writing has enormous warmth and vitality … we need scientists such as him’ Fiona Harvey, Financial Times James Lovelock is the author of more than 200 scientific papers and the originator of the Gaia Hypothesis (now Gaia Theory). He has written three books on the subject- Gaia- A New Look at Life on Earth, The Ages of Gaia and Gaia- The Practical Science of Planetary Medicine, as well as an autobiography, Homage to Gaia. In September 2005 Prospect magazine named him as one of the world’s top 100 global public intellectuals.

END_OF_DOCUMENT_TOKEN_TO_BE_REPLACED

The author's Gaia theory, the idea that our planet is a living, self-regulating system, has transformed the way we see our planet and what is now happening to it. In this book, he distils a lifetime's wisdom and observation of the...

The Revenge of Gaia: Why the Earth is Fighting Back and How We Can Still Save Humanity

For thousands of years, humans have exploited the planet without counting the cost. Now Gaia, the living Earth, is fighting back. As the polar icecaps shrink and the global temperature rises, we approach the point of no return....