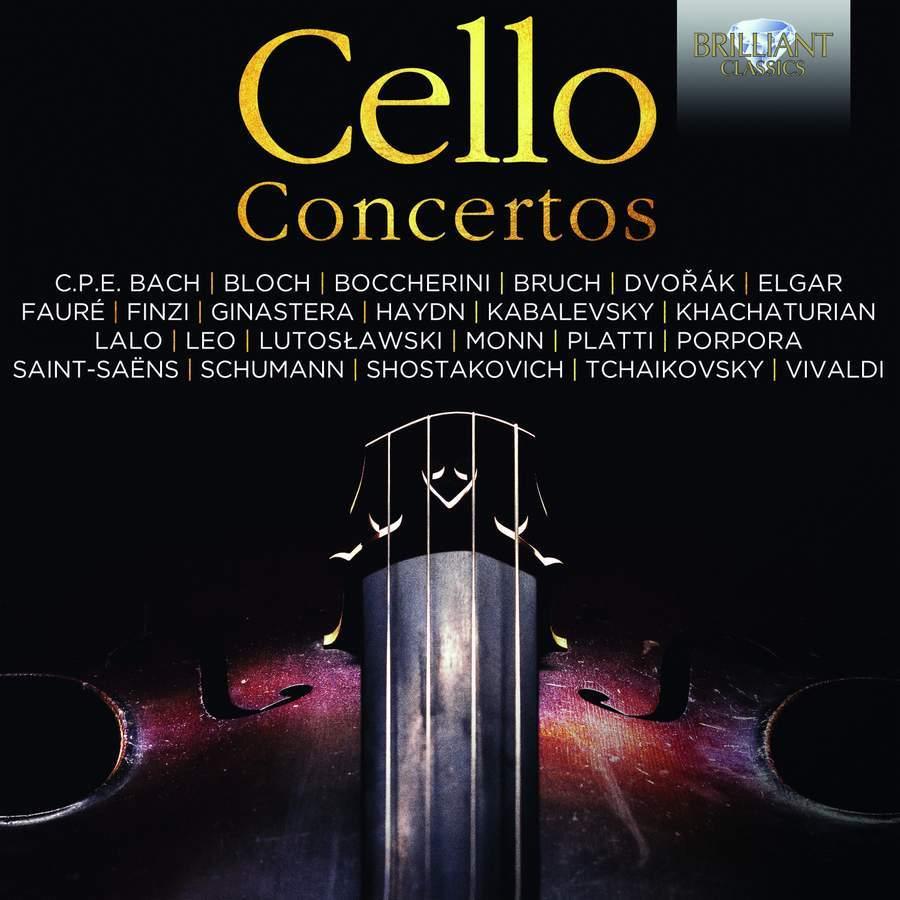 This set brings together outstanding performances of landmark works from the full range of the cello concerto’s relatively short history, from the Baroque to the end of the last century. Before 1800 few important cello concertos were written - with the exception of works by composers of stature such as C.P.E. Bach, Haydn, Boccherini and Vivaldi. The latter’s typically inventive and diverse cello concertos with eloquent slow movements are almost certainly the very first composed for this instrument.
That most of the great cello concertos were composed after the Baroque or Classical period is rather ironic, since the ever-larger orchestral forces of the 19th century and beyond required much more care from the composer to avoid overwhelming the solo cellist in the lower register. Dvořák scored his magnificent cello concerto (1894-5) for a weighty orchestration, containing three trombones and tuba, but his experience enabled him to judiciously manage the solo/orchestra balance. The result is an epic work brimming with melodies and embracing a wide range of emotions. Alongside Dvořák, Schumann and Saint-Saëns brought full recognition to cello concertos. In 1850, Schumann’s cello concerto became the first major concerto for this instrument since Boccherini’s examples from 1780.
20th-century composers have made the cello a standard concerto instrument. Among the most notable from the first half of the century is Elgar’s, composed in 1919, in which the English composer explores introspective and meditative expression. Polish composer Witold Lutosławski, one of the outstanding musical minds of the latter half of the 20th century, employs avant-garde techniques in his concerto (1969-70) along with the typical drama of soloist/orchestra confrontation.
This CD set offers an extensive anthology of the Cello Concerto on 15 CDs.
The deep resonant and eloquent sound of the cello is able to express the widest spectrum of human emotions, from intimately whispering, mournfully lamenting to passionately singing. The first cello concertos were written in the Baroque, when the instrument shed its modest role as part of the continuo group to take its place as solo instrument in a concerto setting. During the Classical and Romantic era surprisingly few concertos were written, while the 20th century yielded some of the greatest masterworks in the genre.
The set contains concertos by Vivaldi, Platti, Porpora, Monn, C.P.E. Bach, Haydn, Boccherini, Leo, Schumann, Saint-Saëns, Dvorak, Elgar, Tchaikovsky, Finzi, Lalo, Bruch, Fauré, Bloch, Ginastera, Kabalevsky, Khachaturian, Lutoslawski.
Excellent performers, including Francesco Galligioni, Adriano Maria Fazio, Stefano Veggetti, Enrico Bronzi, Jan Vogler, Maria Kliegel, Alexander Rudin, Raphael Wallfisch, Julius Berger, Zara Nelsova, István Várdai, Alexander Kniazev, Tim Hugh, Timora Rosler and Dmitri Yablonsky.
$21.99Add to basket ›