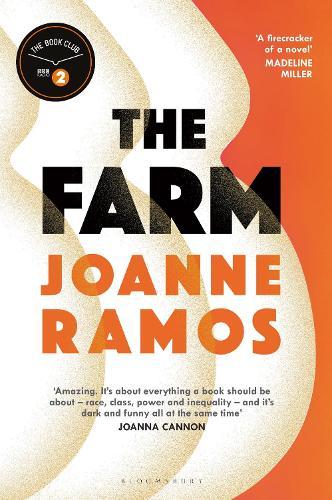 Ambitious businesswoman Mae Yu runs Golden Oaks - a luxury retreat transforming the fertility economy - where women get the very best of everything, so long as they play by the rules.

Jane is a young immigrant in search of a better future. Stuck living in a cramped dorm with her baby daughter and shrewd aunt Ate, she sees an unmissable chance to change her life. But at what cost?
A novel that explores the role of luck and merit, class, ambition and sacrifice, The Farm is an unforgettable story about how we live and who truly holds power.
The must-read debut novel of 2019. Sharp, compulsive and darkly funny, this is an unforgettable novel about a world within touching distance of our own.

Golden Oaks is a farm in upstate New York where women (mostly women of colour) are paid to act as ‘hosts’ (surrogates) carrying babies for wealthy clients. The story of The Farm is told by four different women: Ate, Jane, Mae and Raegan. Ate is close to seventy years old and has worked as a baby-nurse in Manhattan for rich and mostly white clients for over twenty years. She sends her wages back to the Philippines where her children still live. Ate sleeps in a dormitory with dozens of other workers from the Philippines including her much younger cousin, Jane, who is struggling to make ends meet as a single mother with a newborn baby. Ate acts as a scout for new surrogates to be employed at Golden Oaks and she puts Jane forward as a potential host.

Mae grew up in America in a wealthy household; her father was born in China but was determined that Mae would grow up in capitalist America, where he believed she would have the best life. After graduating from college, Mae began working for a chain of luxury resorts, including the very secret and exclusive Golden Oaks. Mae becomes the managing director of Golden Oaks and is responsible for recruiting hosts and monitoring their wellbeing. The hosts are mostly from the Caribbean and the Philippines, but clients will pay a premium for white hosts with a college education. Reagan is Mae’s top recruit. She is white, well-educated and drawn to surrogacy in order to help those less fortunate. There are no easy heroes or villains among these characters and when Jane is denied access to her daughter and Reagan realises Mae is not being completely honest with her, everyone’s lives begin to unravel.

Obvious comparisons can be made with Margaret Atwood’s The Handmaid’s Tale, however where Atwood’s work has been criticised for presenting a dystopian future for white women that largely ignores what women of colour have always been subjected to, Joanne Ramos provides an essential voice for the experiences of women of colour today. The Farm has a page-turning plot and succeeds as an original interrogation of race and class in America today.

Kara Nicholson works as a bookseller at Readings Carlton and as a member of the online team.