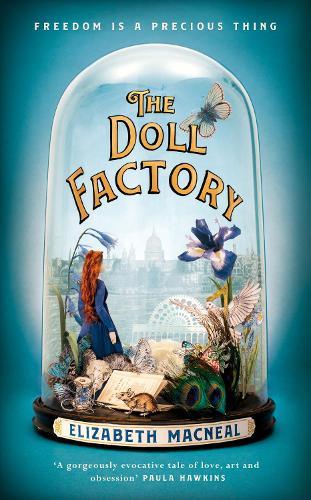 The Doll Factory, the debut novel by Elizabeth Macneal, is an intoxicating story of art, obsession and possession.
London. 1850. The Great Exhibition is being erected in Hyde Park and among the crowd watching the spectacle two people meet. For Iris, an aspiring artist, it is the encounter of a moment – forgotten seconds later, but for Silas, a collector entranced by the strange and beautiful, that meeting marks a new beginning.
When Iris is asked to model for pre-Raphaelite artist Louis Frost, she agrees on the condition that he will also teach her to paint. Suddenly her world begins to expand, to become a place of art and love.
But Silas has only thought of one thing since their meeting, and his obsession is darkening…

In this unusual, yet confidently written debut, Elizabeth Macneal transports the reader to London, 1851. The London of Charles Dickens, William Makepeace Thackeray and Wilkie Collins, where the finishing touches are being put on the Crystal Palace, the site of the Great Exhibition, ahead of its highly anticipated opening. The streets, bustling with activity, are covered with excrement, adding a stench to the smog-filled air. This is the London of the open sewer, the urchin pickpocket, of Fagan, the streetwalker, of Bazalgette and Brunel. Macneal has done well to evoke the environs.

Our protagonist, Iris, is apprenticed to a maker of porcelain dolls. Dreaming of becoming an artist and growing resentful of her sister and, more generally, her ‘lot’ in life, Iris encounters Louis Frost, a (fictionalised) member of the Pre- Raphaelite Brotherhood (est. 1848), who at once sees potential in her as a model, and she, in him, the possibility of artistic training. (I can’t quite tell which Pre- Raphaelite Brother Louis is based on; but the paintings referenced by Millais and Hunt are the real deal.)

Far richer and more worldly than she had ever been in her previous life, Iris’s realisation that she is still part of a machine, albeit an artistic one, reveals the proverbial ‘glass ceiling’. Macneal’s inclusion of Silas Reed, a downright creepy pseudo-naturalist, adds another, more sinister, layer to this plot. I shuddered a lot while reading this. It’s impossible to ignore the contemporary parallels, particularly knowing men like Reed exist now as they did then. We’d give Reed all sorts of labels today, subverting his own taxonomy. With this book, Macneal puts great literary distance between herself and the Victorian boys’ club I mentioned above.