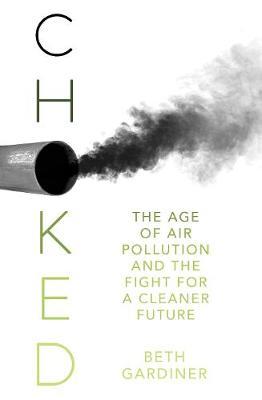 The landmark book on air pollution: a major threat to the health and longevity of each and every one of us.
Every year, air pollution prematurely kills seven million people around the world. Its impact has been linked to strokes, heart attacks, cancer, premature birth and Alzheimer’s disease. The people affected are not just the mask-wearing masses of China, where clean air was sold in bottles as a publicity stunt to draw attention to the grim deterioration of air quality; nor are they solely the workers of India’s factory slums. These people are the rich as much as they are the poor. They are as much inhabitants of first world countries and major cities like London and Los Angeles as they are the coal-burners of Poland. They are everyone with a pair of lungs around a car, an underground train network, a flourishing industrial sector. They are us.
In Choked, Beth Gardiner travels to air pollution hot-spots around the world to meet the scientists who have transformed our understanding of air pollution, and to trace the commercial pressures and political decisions that have allowed it to remain at life-threatening levels. Gardiner presents us with the hard facts about the most insidious threat to our lives, our lungs and our cities. But she also offers us real-world solutions, and inspiring stories of the individuals and groups who are fighting for a less toxic future. Choked is a figurative breath of fresh air in a discussion too long fogged over.
$32.99Add to basket ›

END_OF_DOCUMENT_TOKEN_TO_BE_REPLACED

We are the Weather