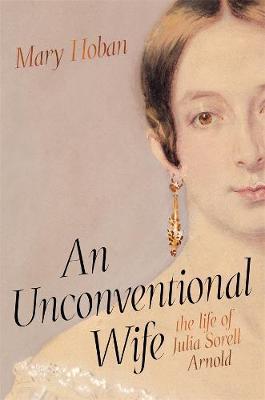 Julia Sorell was an original. A colonial belle from Tasmania, vivacious and warm-hearted, Julia’s marriage to Tom Arnold in 1850 propelled her into one of the most renowned families in England and into a circle that included Lewis Carroll and George Eliot. Her eldest daughter became a bestselling novelist, while her grandchildren included the writer Aldous Huxley, author of Brave New World, and the evolutionary biologist Julian Huxley.
With these family connections, Julia is a presence in many documented and famous lives, but she is a mostly silent presence. When extracted from her background of colonial life, extracted from the covers of marriage and family life, her story reveals an extraordinary woman, a paradox who defied convention as much as she embraced it.
What began as a marriage born of desire soon turned into a relationship riven by discord. Tom’s sudden decision to become a Catholic and Julia’s refusal to convert with him plunged their lives into a crisis wherein their great love for each other would be pitted against their profoundly different understandings of marriage and religion. It was a conflict that would play out over three decades in a time when science challenged religion, when industrialisation challenged agrarian forms, when democracy challenged aristocracy, when women began to challenge men. It was a conflict that would shape not only their own lives and that of their children, but also touch the lives of all those who came into contact with them.
Told with the pace, depth, and psychological richness of a great novel, An Unconventional Wife is a riveting biography that shines a shaft of light on a hidden but captivating life.
$16.95Add to basket ›