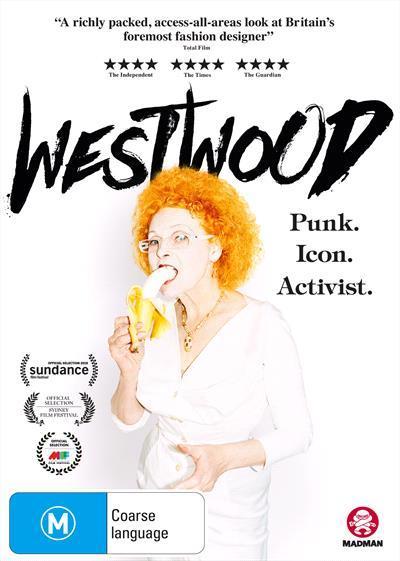 With exclusive, unprecedented access, WESTWOOD: PUNK, ICON, ACTIVIST is the first film about the grande dame of punk and infant terrible of British fashion, Vivienne Westwood.
The film explores her uphill struggle to success, looking closely at her artistry, activism and cultural significance. Blending iconic archive and new footage, this intimate story is told in Vivienne’s own words, and through touching interviews with her inner circle.
WESTWOOD: PUNK, ICON, ACTIVIST is the remarkable story of one of the true icons of our time, as she fights to maintain her brands integrity, her principles and her legacy.

‘I’m just totally bored talking about this. But you need it, so I’ll tell you.’ So starts Westwood: Punk, Icon, Activist, with a discernible friction between camera and subject that ultimately makes this documentary about British fashion designer Vivienne Westwood the fascinating film that it is. Whenever filmmaker Lorna Tucker asks Westwood direct questions she remains hesitant to answer, yet Westwood: Punk, Icon, Activist is striking for its intimate access. It benefits from Tucker’s friendship with Westwood in the years prior to the film’s making. In an early scene we see the designer rolling out of bed in the morning; later at her atelier, we witness a lengthy outburst over the width of a hem.

Westwood: Punk, Icon, Activist delivers all the vital information: how Westwood started making her own clothes aged eleven; her decision to drop out of art school because she couldn’t imagine making a living from creative pursuits; her young marriage and motherhood and the end of that marriage when she met Malcolm McLaren in the late 1960s. But Tucker doesn’t spend as much time as expected on what famously came next – the Sex Pistols, and the birth of a visual aesthetic, via Westwood, that delivered the punk movement to the world. The past, we understand, is the past for Westwood.

What emerges from Tucker’s smart film is a view of Westwood’s iconoclasm that extends beyond punk into every aspect of her life. The mother of reinvention, in recent years Westwood has remade herself as an ardent activist for causes such as climate change. Although Westwood: Punk, Icon, Activist doesn’t really come to grips with questions of sustainability and waste in an industry rife with the latter, it’s an honest portrait of a woman who continues to do what she wants, the way she wants to. And that’s always thrilling to watch.