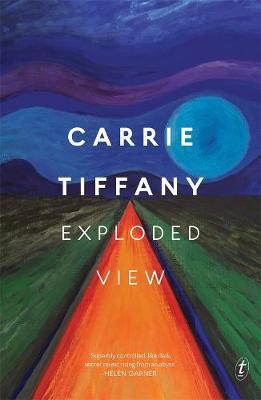 A dangerous man moves in with a mother and her two adolescent children. The man runs an unlicensed mechanic’s workshop at the back of their property. The girl resists the man with silence, and finally with sabotage. She fights him at the place where she believes his heart lives-in the engine of the car.
Set at the close of the 1970s and traversing thousands of kilometres of inland roads, Exploded View is a revelatory interrogation of Australian girlhood.
Must a girl always be a part - how can she become a whole?

Carrie Tiffany writes compact but expansive novels. Among other prizes, Everyman’s Rules for Scientific Living was shortlisted for the Guardian First Book Award, while Mateship with Birds won the inaugural Stella Prize. Both were shortlisted for the Miles Franklin. Tiffany’s third novel, Exploded View will, I suspect, be similarly awarded, if not more so. A friend who happened to be reading a review copy just before I started reading my own said to me, ‘No one in this country writes like Carrie Tiffany.’ We were eating pizza, and I missed the moment to tease this out, but when I started reading I understood quickly.

The novel is narrated by a young girl whose mother has a new partner, referred to as ‘father man’. Something is deeply amiss here, with him. In her own way, however, the girl is fighting back. Father man is a mechanic, fixing cars at home. His business is struggling. At night, in absolute darkness, she slides down amongst the cars, removing irreplaceable screws, compromising seals, pipes and connections, navigating the intricate assembly by hand. All the while, it becomes increasingly apparent how much he’s taken from her.

This is a novel for readers of Emma Donoghue, Sophie Laguna, Michael Sala, Jenny Erpenbeck, but also for readers of those rare novelists who are as cerebral as they are emotionally rich – J.M. Coetzee, Richard Ford, Elena Ferrante. The narrator views and experiences life at a safe remove by way of the function and assembly of mechanical objects. For her, and for us as we read, human bodies, and that strange link between us, as well as such things as gender, sexuality, family and even love, feel, if not artificial, somehow heavy and made, in the way car parts are heavy and made. There’s so much observational and felt intelligence convincingly crammed into this child narrator. Days after I finished reading, I still felt the strange ‘air’ or ‘sky’ or negative space around me, around people, around our habits.

END_OF_DOCUMENT_TOKEN_TO_BE_REPLACED

Most anticipated books of 2019

END_OF_DOCUMENT_TOKEN_TO_BE_REPLACED

Heart of the Grass Tree

Beyond Words: A Year with Kenneth Cook