Bangkok Wakes to Rain: Shortlisted for the 2020 Edward Stanford ‘Fiction with a Sense of Place’ award 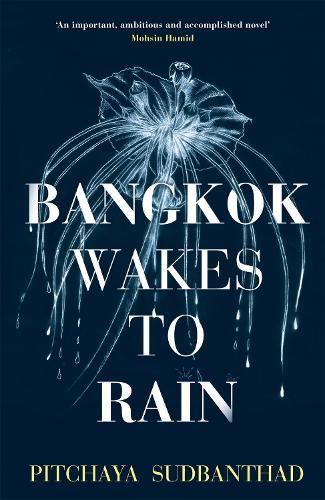 Bangkok Wakes to Rain: Shortlisted for the 2020 Edward Stanford ‘Fiction with a Sense of Place’ award

A missionary begs to be moved from disease-ridden Bangkok.
A musician plays a private show for ghosts.
A student abandoned by his lover bleeds to death in the street.
A plastic surgeon designs a girl a new face.
A woman decides whether to cook a final meal for a dying murderer.
Lurching through decades, from Bagkok’s rich past to its imagined, uploaded future, witness the city as it changes from a booming capitalist hub to a city engulfed by water, through human tales seeping into one another, held together by delicate threads.
For fans of A VISIT FROM THE GOON SQUAD and CLOUD ATLAS, this is a startling and intimate novel by a lyrical new writer.

Life in Pitchaya Sudbanthad’s Bangkok is neither fair nor unfair: ‘it is only so,’ goes the mantra, reminding us that these events, the passing of old to new, the rise and fall of life and a nation, are as inevitable as ocean eroding rock.

From nineteenth-century Siam, through industrialisation and unrest to a future where the old city is lost, submerged by the rising ocean, Bangkok Wakes to Rain charts the history of a house and its inhabitants. In this book characters suffer profound disconnect, some returning home to find they don’t belong, while others, who stayed behind, retreat so far inside themselves they can no longer be reached.

Throughout the novel Sudbanthad evokes a Bangkok of smells and tastes while his characters speak of identity both personal and collective, of loyalty and duty, and of globalisation against culture. Time passes. We live. We grow old and we regret. Yet it is only so.

The result is beguiling. At its strongest it is magic realism with Bangkok itself the protagonist, an Orlando who transforms with each generation. Allusions to timelessness also bring to mind David Mitchell, whose world might not shape his characters’ lives but at the very least puts them at its mercy.

Somewhere in this vast, enigmatic work there should be more of Bangkok. To describe so many lives and worlds in a book of three hundred and sixty pages strains the prose at times, and means tall trees rob the flowers of light. The city loses its chaos and closeness when spread over centuries; such beautiful, bittersweet lives are obscured by the sheer number in view.

It may overreach, but I departed Sudbanthad’s Bangkok utterly charmed: it exudes wisdom and hints at greatness, and if his work continues to explore this fertile ground then great things will surely follow.