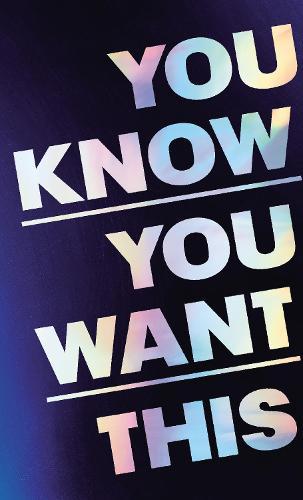 The truth was that if a woman bit a man in an office environment, there would be a strong assumption that the man had done something to deserve it…
From the creator of Cat Person - the first short story to go viral - comes You Know You Want This, a compulsive collection about sex, dating and modern life. These are stories of women’s lives now. They also happen to be horror stories. In some, women endure the horror. In others, they inflict it.
Here are women at work, at home, on dates, at the doctor’s, with their families and with their friends. Here are women grappling with desire, punishment, guilt and anger. These are stories that make you feel fascinated but repelled, scared but delighted, revolted but aroused.
You Know You Want This shows why Kristen Roupenian is the most audacious new voice in American fiction. Funny, furious, sly and explicit, she takes a long, hard look at the messed-up power dynamic between men and women - and messes it up some more.

As with many explosions on the internet, I was a little slow to smell the fire caused by Kristen Roupenian’s short story, ‘Cat Person,’ when it appeared in the New Yorker in December 2017. Thankfully, I’m now caught up. That story, with its detached yet intimate account of a bad date between a college student and an older man, went viral for a number of reasons, depending on which corner of the internet you inhabit. For women, young and older, ‘Cat Person’ was deeply perceptive about what dating today feels like. For men, it held up a mirror to some uncomfortable truths about their part in this fraught dynamic.

‘Cat Person’ occupies the central spot in Roupenian’s debut short-story collection, You Know You Want This – twelve dark tales that explore gender, sex, and power in often uncanny and uncomfortable ways. There is ‘The Good Guy,’ which is a natural cousin to ‘Cat Person,’ but offers its disturbing insights from the point of view of a selfproclaimed ‘nice guy’. Throughout this collection Roupenian compiles a catalogue of the everyday horrors of heterosexual relations. But she also distorts these horrors, in stories like ‘Bad Boy’ and ‘Biter,’ to push at the fine line that exists between desire and disgust.

You Know You Want This speaks to the #MeToo movement and women’s increasing anger at men’s abuses of power. Roupenian’s writing is smart, sharp, and clear. There is violence here – emotional, physical, and sexual. But while Roupenian’s stories are shocking, they are also often funny. Roupenian’s characters know what they want, but they often hate themselves for wanting it. You Know You Want This gains its power, I think, not because it locks women and men into just being – or wanting – one thing or another, but from presenting us as creatures who contain contradictory and complex impulses and who have to find a way to live with them.