William Shakespeare, Roger Warren (Editor of Cymbeline and co-editor, with Stanley Wells, of Twelfth Night for the Oxford Shakespeare.) 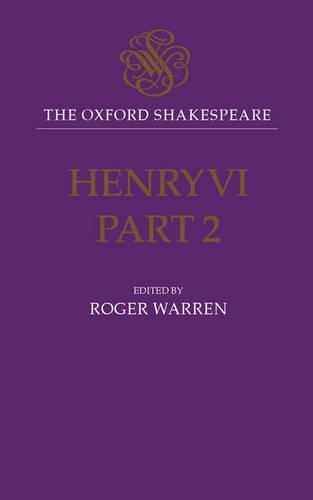 William Shakespeare, Roger Warren (Editor of Cymbeline and co-editor, with Stanley Wells, of Twelfth Night for the Oxford Shakespeare.)

Shakespeare’s Henry VI plays have come fully into their own in the modern theatre. They dramatize contemporary as much as Elizabethan issues: the struggle for power, the manoeuvres of politicians, social unrest, civil war - no wonder they have struck a chord with modern audiences. Roger Warren draws on his experience of Henry VI, Part Two in rehearsal as well as in performance to focus both the theatricality and the enduring contemporary relevance of the play, both in a wide-ranging Introduction and a detailed Commentary, which also provides a thorough explanation of the play’s vivid language. The Textual Introduction offers a complete reconsideration of the complex relation between the two original texts.