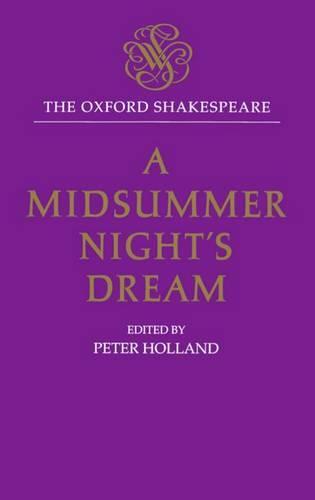 A Midsummer Night’s Dream is perhaps the best-loved of Shakespeare’s plays, and certainly the one that children are likely to encounter first; its mixture of aristocrats, workers, and fairies meeting in a wood outside Athens has a magic of its own. Simple and engaging on the surface, it is nonetheless a highly original and sophisticated work, remarkable for both its literary and its theatrical mastery. The fact that it is one of the very few of Shakespeare’s plays not to draw on a narrative source suggests the degree to which it reflects his deepest imaginative concerns.In his Introduction, defining the play in both the literary and theatrical traditions to which it belongs, Peter Holland pays particular attention to dreams and dreamers, tracing the materials out of which Shakespeare constructs his world of night and shadows in the strange but enchanting amalgam he makes of them. Both here and in the detailed commentary he draws freely upon the play’s extensive performance history to illustrate the wide range of interpretations of which it is capable.