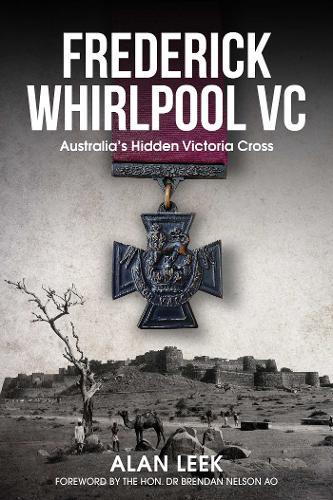 A riveting historical mystery that sweeps four continents and fills a void in the Victoria Cross story. Frederick Whirlpool’s Victoria Cross is displayed near the entrance to the Hall of Valour at the Australian War Memorial, Canberra. It was the first VC pinned to an Australian uniform, yet almost nothing was known about its enigmatic recipient. Two acts of valour during the Indian Mutiny, won him the Victoria Cross, but 17 severe sword wounds ended his career. Arriving in Victoria in 1859, he became a volunteer rifleman and school teacher. His VC was presented in Melbourne in 1861. He was an applicant to join the Victoria Police, but a corrupt recruitment process and unsolicited political interference prevented it. Repulsed by fame, he fled and hid his cross from the world. Fragments of his story were known, but since 1895, they have been tainted by error, guesswork and in one recent British work, pure fantasy. This work solves an old mystery. It reveals his true identity and early life in Ireland before joining the East India Company Army. To understand his service, the Central Indian campaign under Sir Hugh Rose, is examined in some detail, something that has not been done before. The real horrors of that campaign are revealed to show their devastating impact on this sensitive man. Rich sources reveal his anguished story. Humphrey James' reasons for changing his identity and leaving his family forever, are unearthed. His life in Australia is revealed, showing his fall, firstly from policing and then teaching, in NSW. He undoubtedly struggled with his demons and believed that he was destined for eternal damnation. The passage of his Victoria Cross, after his death was unknown before it appeared on the market in 1927. Its movements and those of his Indian Mutiny medal with its Central India clasp, are now revealed' This fascinating story fills huge gaps in the narrative of this ordinary man, whose life is deserving of factual interpretation. It is a story of heroism, suffering and failure, but the forgotten man will triumph in its telling. His sad life ended as a recluse in 1899, and he was buried in an unmarked grave in Windsor. The only mourner who attended his funeral left a thread, which has allowed painstaking research to uncover the true story of this sad and purposefully enigmatic hero.