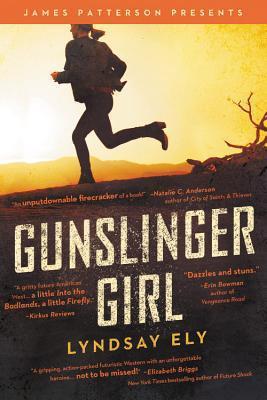 James Patterson presents a genre-bending, action-packed debut–and introduces YA’s new favorite, kick-ass heroine: Serendipity Jones, the fastest sharpshooter in tomorrow’s West.
Seventeen-year-old Serendipity  Pity  Jones inherited two things from her mother: a pair of six shooters and perfect aim. When her father attempts to marry her off to a stranger, she runs away from their humble farming commune and ends up in the most dangerous, decadent city on the continent: Cessation (a lawless Las Vegas). Pity becomes the star of the Theater Vespertine as a trick sharpshooter like Annie Oakley, and there she finds fame, friendship and–what she most wanted–belonging.
But there’s a darker side to the Theater…The Finale. Every so often the fighting factions of Cessation have to be kept in line with a little demonstration, a nightmarish public execution. And Pity has a starring role…
WESTWORLD meets Marie Lu’s LEGEND in this extraordinary YA debut, now available in paperback!
$16.99Add to basket ›