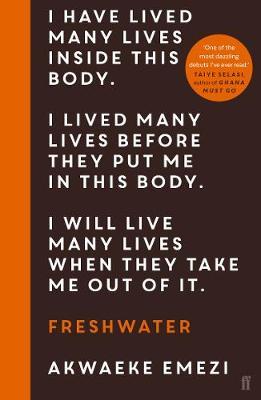 Ada was born with one foot on the other side. Having prayed her into existence, her parents Saul and Saachi struggle to deal with the volatile and contradictory spirits peopling their troubled girl. When Ada comes of age and heads to college, the entities within her grow in power and agency.

An assault leads to a crystallization of her selves: Asughara and Saint Vincent. As Ada fades into the background of her own mind and these selves - now protective, now hedonistic - seize control of Ada, her life spirals in a dark and dangerous direction.
Narrated from the perspectives of the various selves within Ada, and based in the author’s realities, Freshwater explores the metaphysics of identity and being. Feeling explodes through the language of this scalding novel, heralding the arrival of a fierce new literary voice.

Announced September 2018: Akwaeke Emezi has been picked by the National Book Foundation as one of the five most important writers under 35 publishing in the US.