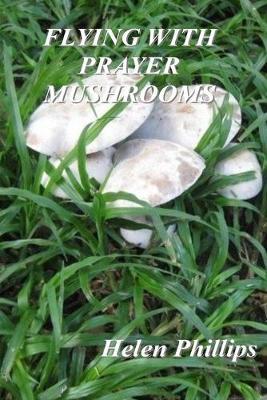 Flying with Prayer Mushrooms is a book about a vision of mushrooms coming up everywhere in the city of Cape Town, South Africa. This was followed by the vision of a huge mushroom, like an atomic cloud hanging over the city and then moving up to the north. When Helen Phillips asked God what these visions meant He said that the little mushrooms were small prayer groups in business, offices and factories and that she must find them, encourage them and start more all over the city and suburbs. Then God said that the power that would come from this prayer was in the atomic mushroom cloud which was going to save the city and as it moved up South Africa would bring salvation to Africa and Europe and the world. Excited but overawed Helen set out to fulfill this mission. The book also has other prophecies given for the end time revival starting in Cape Town and spreading all over the world. There are also stories of other prayer movements calling people to pray in other segments of society showing that the mushroom vision was part of a universal call from God to mobilize ordinary people from every walk of life, every race and nation to pray calling in the coming revival that will ultimately usher in the second coming of Christ. This is a book for NOW when evil appears to be in the ascendancy and secular modern humanism has lauded behavior which is called an abomination to God. The Bible is being discarded and any mention of God is prevented in public places and prayer is forbidden. This is time when children are killed as shootings take place in schools and in public places for no apparent reason. Integrity, honesty, and goodness are a thing of the past and NOW is the time we need to pray and call on God’s help for our corrupt world. This is a book for everyone who would like to make a difference and does not know how. Praying is God’s call for us to make a difference. We cannot change the world but God can. There are also tips on how to pray, and various types of prayer to defeat the devil and cast out the evil of satanism, witches and warlocks. This book calls us to save our world from evil by calling on God in prayer.