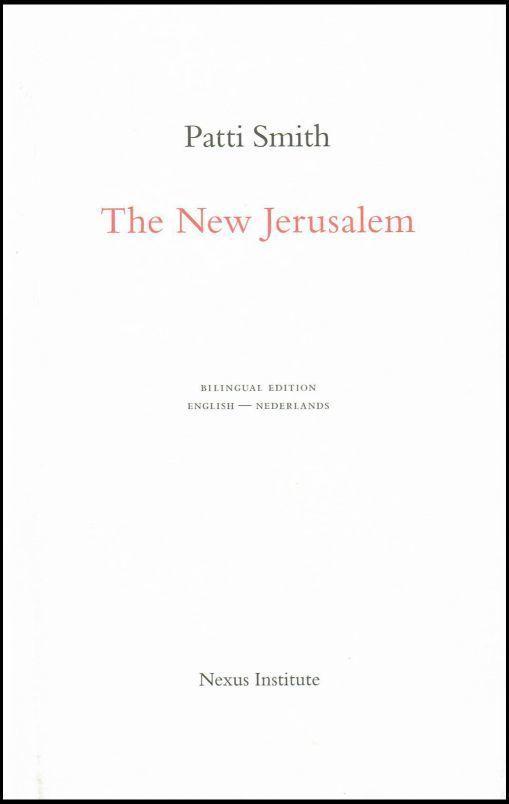 The New Jerusalem, the new book by poet and punk legend Patti Smith. This long prose poem in the tradition of John’s Revelation and the poetry of William Blake shows a prophetic vision of art and humanity, faith and freedom; an image of the escape from the rituals of power and the mechanisms of social control.
This beautiful bilingual (English & Dutch), bound edition features color illustrations and photos by Patti Smith and is irresistible to the real bibliophile. The introduction by Rob Riemen discusses the relationship between art and spirituality in the poem by Patti Smith and in art in a general sense.

When Nexus Institute founder Rob Riemen wrote Patti Smith a letter of admiration, he also sent her a book he had written and an invitation to take part in a Nexus Symposium on ‘New York counterculture as a university of life’. In Riemen, Smith recognised a kindred spirit and responded with a phone call and invitation to: ‘Meet me in my café. I’ll be there writing.’

Anyone who has read M-Train will be familiar with Smith’s café, and with the idea of the sanctity of the artist and creator that infuses much of her writing. When Riemen meets Smith she is working on a poem, ‘The New Jerusalem’, partly inspired by Trump’s decision to move the US embassy to Jerusalem, partly inspired by Blake, and possibly a modern reflection on the prophecy in The Revelation of St. John in the New Testament.

The idea of the sacred, of writer and artist as prophet and visionary, has been explored by poets and philosophers for centuries, but Riemen expresses surprise that a punk such as Smith would consider Christ, alongside the likes of Wilde, Ginsberg, Blake, Camus and Mapplethorpe, as an artist.

This idea of the sacred and the religious bleeds through The New Jerusalem: there is the sense of Smith digging deep to excavate the treasure of this poem. The rhythms in Smith’s prose poem read like passages from an ancient text, with themes both contemporary and eternal. The language is ethereal yet political, while the accompanying images lend the text an extra layer of gravitas.

The hardcover book is slight; it is an object to be admired, with pages of woven rayon cloth, sewn and bound, and gold foil printed cover. The latter half of the book is a Dutch translation of the English text; the earlier pages comprise Riemen’s introduction, while Smith’s poem covers a brief sixteen pages. Brief, perhaps, but weighty, and I expect I’ll be revisiting these pages often. Smith collectors will love it.