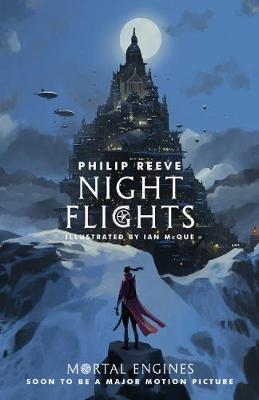 Return to the world of Mortal Engines in this new book of three short stories about the rebellious young aviatrix, Anna Fang, illustrated by Ian McQue. A key character in the Mortal Engines book and film, this is your chance to learn more of her past. Night Flights includes Traction City, the 2011 World Book Day story by Philip Reeve.
In a dangerous future world where gigantic, motorised cities attack and devour each other, London hunts where no other predator dares. But Anna Fang: pilot, adventurer, spy…is not afraid.
The three stories show gripping, moving, exciting moments in Anna Fang’s life: her childhood as a slave aboard the moving city Arkangel, a showdown against a robotic Stalker that is terrifyingly out of control, and her free life as an intelligence agent for the Anti Traction league that might not be quite as free as she hoped.
$16.99Add to basket ›

The Mystery of the Magic Stones: Polly and Buster Book Two

How Did I Get Here?

END_OF_DOCUMENT_TOKEN_TO_BE_REPLACED

The first instalment in the MORTAL ENGINES quartet, introducing young apprentice Tom Natsworthy and the murderous Hester Shaw, flung from the fast-moving city of London into heart-stopping adventures in the wastelands of the Great...

Anna Fang is a spy. An aviatrix. An escaped slave. But no one knows the whole story of Anna Fang - until now. Ian McQue's stunning illustrations bring the city-eat-city world of Mortal Engines alive in these three original stories...