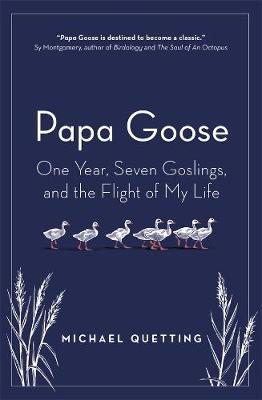 Michael Quetting is exhausted and covered in goose shit.
One moment a gosling is sleeping soundly under his sweater and the next, there’s one tugging at his shoelaces.
Being father to a gaggle of goslings that won’t let you out of their sight is a full-time job. As a laboratory director at the Max Planck Institute for Ornithology, Quetting must transform the motley gang into a disciplined flight crew so researchers can gather data about weather and flight patterns.
Detaching from civilization and immersing himself in the training, Quetting leads his young on daily swims, retrieves them when they go astray, and watches as their personalities develop-feisty, churlish, loveable-while solving problems such as how to roll down the runway without running the geese over before they even get airborne.
This charming book traces Quetting’s heart-warming and highly entertaining adventure as goslings Gloria, Nemo, and the rest of the crew conquer land, water, and air. By the time the journey is over, Quetting has learned from his charges more than he ever expected about nature and what it means to be human.

In 2017, various institutes across Germany and Russia joined teams to form the International Cooperation for Animal Research Using Space, better known as ICARUS. The idea was to use satellites to track population levels of endangered species, changes in climate, the spread of pathogens, and much more, by monitoring the global movements of animals.

When Michael Quetting (pronounced Kfetting) is chosen to lead a small part of ICARUS at the Max Planck Institute where he works, he can’t begin to imagine the emotional impact it will have on him. His task is to hatch and raise a family of goslings so that one day, when they’re ready to fly, he can equip them with the gear that will record weather patterns from an altitude to which we’ve never before had this kind of access, and transmit the data to the ICARUS computers.

Talking to them through the eggs and holding them so they become familiar with his smell, his voice, his very presence, Quetting ensured that when they hatched they would imprint on him and think of him as ‘Papa Goose.’ He didn’t expect, however, that he, too, would feel as though he imprinted on them, and that he would feel the need to raise and protect them as if they were his own children.

Translated from German by Jane Billinghurst, who worked on The Hidden Life Of Trees by Peter Wohlleben, Papa Goose is written with warmth and a quirky sense of humour as it follows Quetting’s escapades with the geese. From watching them get excited over jumping in puddles, to falling asleep with them huddled under his jumper and waking up covered in their shit.

Papa Goose is such a wonderfully lighthearted story, asking questions about our relationship with nature, and how it can teach us a thing or two about keeping it together when the world around us seems to be going crazy, that it made me want to start my own little family of geese.