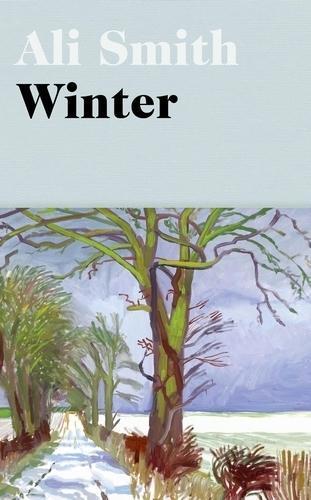 Winter? Bleak. Earth as iron, water as stone, so the old song goes. But winter makes things visible. And Christmas is a time for family reunions, unexpected guests and evergreen truths.
It’s December in Cornwall and Art’s mother is seeing things. Art has problems too. His girlfriend has left so he’s paying Lux, a young immigrant he found on the street, to impersonate her - but Lux has no intention of sticking to the script. And Iris, Art’s prodigal aunt, septuagenarian CND-er and black sheep of the family, is about to arrive with a car full of food and a throat full of protest songs. Four people, strangers and family, in a fifteen-bedroom house for Christmas - will there be enough room for everyone?
Winter casts a merry eye over a bleak post-truth era with a story rooted in history, art, love and memory, protest and survival.

For around 20 years, Ali Smith has had a quartet of novels, named simply after the seasons, in the back of her head. Winter is the second of these novels. The first, Autumn, was shortlisted for this year’s Booker Prize.

In a TLS podcast last year, Smith discussed the form of the novel. The word novel means new, and ‘the novel has always formally been about what is new, the newness of its form’. The novel is about time, and the sequential. Yet Smith is interested in how the novel’s interest in now, and sequential time, exists in the now that is cyclical, the experience of time recurring seasonally, the now layered by the past and the future. And so, the quartet continues with Winter, out a year after Autumn and taking place in the northern hemisphere winter that’s just past. It is the winter of the election of Donald Trump, coming after the autumn of Brexit.

In Winter, Sophia Cleeves wakes up, the day before Christmas, to a floating disembodied head. She is alone in her large house in Cornwall, except for the floating head, which has been there for four days. ‘Christmas Eve morning, 10am, and the disembodied head was dozing.’ Her son Art is due for Christmas. Art was stuck in the Ideas Store (which used to be the reference room), using a public computer, driven from his phone and laptop by a fight with his partner, who has taken over his blogging identity, Art in Nature.

As many (northern hemisphere) Christmas stories do, Winter contains an old house, hauntings, a knowledgeable stranger, unexpected arrivals and acts of goodwill. It also gently and yet puckishly gives a context to what is happening now, drawing on everything from Charlie Chaplin to Cymbeline, from Dickens to Barbara Hepworths’ sculptures in stone, to make everything a little less overwhelming.

Smith has masterfully done what she always does. She has written a novel in which ‘the human will always surface’.

Spring will come. The leaves on its trees will open after blossom. Before it arrives, a hundred years of empire-making. The dawn breaks cold and still but, deep in the earth, things are growing.

Winter? Bleak. Earth as iron, water as stone, so the old song goes. But winter makes things visible. And Christmas is a time for family reunions, unexpected guests and evergreen truths.

Fusing Keatsian mists and mellow fruitfulness with the vitality, the immediacy, and the color hit of pop art, Autumn is [an] ... excavation of the present by the past. The novel is a stripped-branches take on popular culture and a...