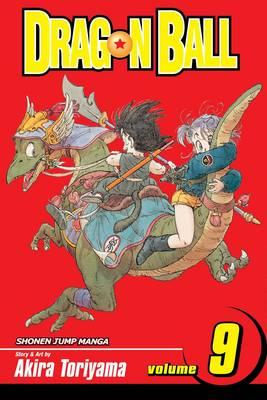 Eath’s greatest hero…is from outerspace! Dragon Ball introduces a young monkey-tailed boy named Goku (a wry update of the classic Chinese Monkey King legend), whose quiet life changes when he meets a girl named Bulma who is on a quest to collect seven Dragon Balls. If she gathers them all, an incredibly powerful dragon will appear and grant her one wish. But the precious orbs are scattered all over the world, and Bulma could use the help of a certain super-strong boy… (In Japan, Dragon Ball and Dragon Ball Z were originally a single 42-volume series. VIZ Media’s Dragon Ball contains vols. 1-16 of the original Japanese Dragon Ball, from the beginning of the series to the climax of Goku’s last fight with Piccolo.) Having defeated the Red Ribbon Army single-handedly and taken their Dragon Balls, Goku finds that one is still missing! To locate it, he goes to the palace of the All-Seeing Crone, Baba Uranai, who can find anything in the world…for a price! The crone agrees to find the Dragon Ball for free if Goku and his friends–Yamcha, Pu'ar, Kuririn and Upa–can best her five supernatural champions in one-on-one combat. but even if they can beat Dracula, the Mummy, and the Devil, the final challenger just might give Goku the shock of his life!