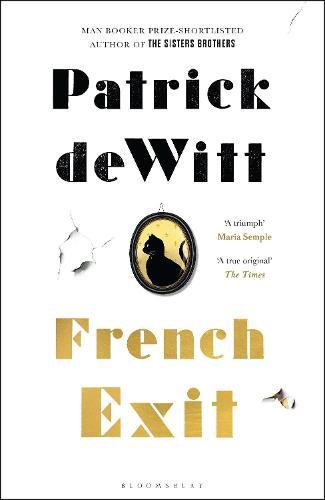 A comedy/tragedy of manners. The new novel from the Man Booker-shortlisted author of The Sisters Brothers.
Frances Price - tart widow, possessive mother and Upper East Side force of nature - is in dire straits, beset by scandal. Her adult son Malcolm is no help, mired in a permanent state of arrested development. And then there’s their cat, who Frances believes houses the spirit of her late husband, an infamously immoral lawyer whose gruesome tabloid death rendered them social outcasts.
To put their troubles behind them, the trio cut their losses and head for the exit. Their beloved Paris becomes the backdrop for a giddy drive to self-destruction, helped along by a cast of singularly curious characters: a bashful private investigator, an aimless psychic and Mme. Reynard, friendly American expat and aggressive houseguest.
Brimming with pathos, warmth and wit, French Exit is a one-of-a-kind tragedy of manners, a riotous send-up of high society and a moving story of mothers and sons.

‘French Exit’: hastily leaving a social gathering without saying goodbye (see also, Irish Goodbye, taking English Leave, ghosting). Frances, her adult son Malcolm and their cat, Small Frank, are out of money. They’re also sick of the social obligations of their life on the Upper East Side of Manhattan. What’s a bankrupt, scandal-clad trio to do? Apparently hop on an ocean liner to Paris and self-destructively spend what little money they have left.

Told with Patrick deWitt’s signature black humour, French Exit turns the strange into the banal and the banal into the strange. At the core of the novel is the mother–son relationship between Frances (in her sixties) and Malcolm (in his thirties). Malcolm spends his early years being neglected by his infamously immoral lawyer father, Frank, and his suave, strong-willed mother. However, when Frank passes away, Frances pulls twelve-year-old Malcolm out of boarding school and the two develop a co-dependent relationship that Oedipus and Freud would both have a few things to say about. This relationship informs their interactions with the rest of French Exit’s zany cast of characters: a short-tempered psychic, a soft-spoken private eye, and an overly friendly American expat. The plot is a bit meandering but this hilarious and heartbreaking portrayal of a (very small) family in decline is not to be missed.

Full disclosure: I’ve been a major deWitt fan since The Sister Brothers was shortlisted for the Man Booker Prize back in 2011. Not to mention I have a soft spot for my fellow Canadians. That being said, deWittland is definitely worth a visit. Especially for those who enjoy the dark wit of Paul Beatty and George Saunders – fellow North Americans with plenty of plaudits to their names.