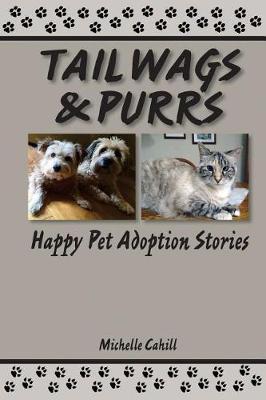 Suitable for readers of all ages, kid-friendly, uplifting Tail Wags and Purrs showcases Michelle Cahill’s experiences volunteering at a local animal shelter for over 20 years. Always an animal lover, she began advocating for them a couple decades into her forty-year Disneyland career. She often took breaks to visit the Park’s animals backstage, especially the horses. One of her happiest memories is watching with fascination as ranch hands carefully braided ribbons through a horse’s mane before its appearance in a ceremony at Sleeping Beauty Castle. Having no pets of her own at that time, she began volunteering with a progressive municipal shelter near her home, a few miles south of Los Angeles, inland off the Pacific Coast. She soon realized how little she knew about animal welfare and was drawn to their plight and the critical role of humans in their lives. One thing became clear: When animals end up homeless, it is usually because of a human failure, not a pet failure. Over the years, she made notes about some of her dog and cat experiences and turned those notes into story drafts. Recently she stumbled upon those drafts stuffed in a drawer and compiled them into Tail Wags and Purrs. Also included are seven first-person adoption stories written by friends and family. It is Michelle’s hope that this entertaining, heartwarming, and educational book will encourage readers to adopt from, volunteer at, or donate to a shelter or rescue organization. At the very least, they will be better informed about how homeless animals are cared for communally and successfully rehomed. Every story is true. Interwoven they illustrate how homeless animals thrive when people with various abilities, resources, and methodologies work toward the same goal–the it takes a village approach.