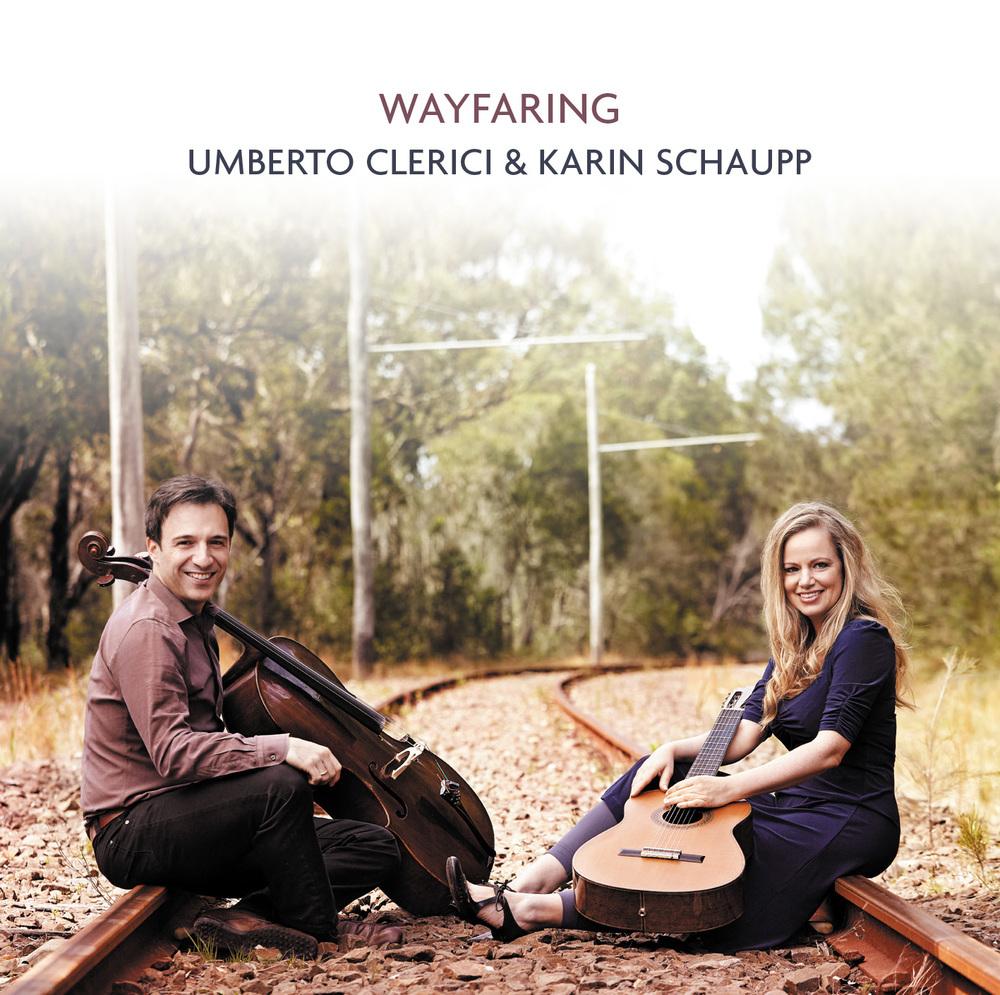 Wayfaring brings together Italian-Australian cellist Umberto Clerici with German-Australian guitarist Karin Schaupp, for a musical journey through a rich tapestry of cultures, ages and emotions.
Clerici and Schaupp discovered an immediate musical connection when they first played together at Musica Viva’s annual festival several years ago. ‘It was a magical connection, as if we just knew each other musically, even though we hadn’t met before,‘ says Schaupp. ‘It’s something very rare. We played a few pieces and decided we simply had to do this again. Last year we gave some recitals and built a program. Then we decided to make this album, and built a whole new program.’
They settled on the linking idea of ‘songs that trace a path from birth to death, with everything in between': a ‘wayfaring' through life. Spending long hours in libraries combing through repertoire, they gradually whittled down their options: the final list expresses joy, grief and every emotion between.
The repertoire stretches from the early baroque (Monteverdi and Caccini) to the present day, with contemporary works by two Australian composers: Elena Kats-Chernin’s Eliza Aria and A Flower’s Purpose by Katie Noonan, the singer-songwriter with whom Schaupp has toured and recorded. They also cover music by Dvořák, Rodrigo (a stunning song adapted by the composer himself from his beloved Concierto de Aranjuez), Rachmaninoff, Schubert and more.
Umberto Clerici is the principal cellist of the Sydney Symphony Orchestra, and an acclaimed soloist; his musicianship has been described as “soulful and beautifully sculpted” (Limelight). Karin Schaupp is an ARIA-winning guitarist acclaimed by the German press for playing “so perfect, so complete, that it seems like a miracle”.
Between them, they have recorded more than a dozen albums; this is their first together. The artists clearly couldn’t be happier at having found one another. ‘It’s as if we feel the music intuitively the same way,‘ says Schaupp. ‘Several times in rehearsal Umberto’s playing even moved me to tears. It’s such a gift to be able to play music and make albums.

Wayfaring, a collaboration between Italian-Australian cellist Umberto Clerici and German-Australian guitarist Karin Schaupp, traces a path ‘from birth to death, with everything in between’. Considering repertoire for solo cello and guitar is scant, Wayfaring features a number of song transcriptions spanning from the early baroque to the present day, rather than music originally intended for that combination. The cello is an instrument capable of imitating the wails and sighs of the human voice, and the plucked-string guitar provides sonorous contrast. Clerici and Schaupp, therefore, are well-suited bedfellows.

I approached this recording with some trepidation, because Clerici and Schaupp have recorded a number of my favourite songs, such as Ravel’s haunting Kaddisch, and Schubert’s Frühlingstraum from Wintereisse, and I have misgivings about meddling with already perfect music. Do these songs – and others – have the same impact when performed by a duo of instruments other than voice and piano? Thankfully, yes. While Schaupp’s guitar does not have the same resonance as a piano, and while Clerici’s cello can draw out longer lines than the voice without need of a breath, the combination suits the simplicity of songs like Brahms’s Es steht ein Lind, and the folksong ‘Wayfaring Stranger’. A lovely, contemplative album.