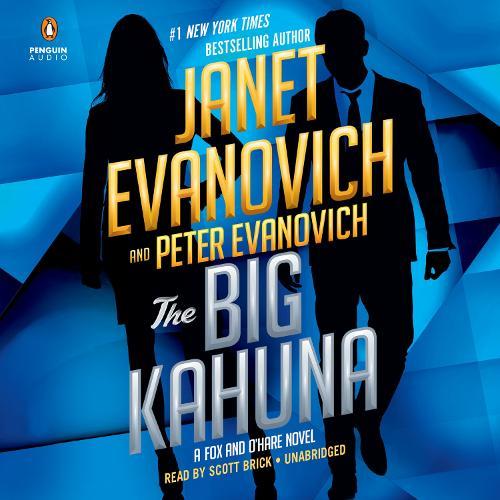 A stoner, an Instagram model, a Czech oligarch, and a missing unicorn. Nick Fox and Kate O'Hare have their work cut out for them in their weirdest, wildest adventure yet in this New York Times bestseller by Janet and Peter Evanovich. Straight arrow FBI Agent Kate O'Hare always plays by the rules. Charming Con Man Nicholas Fox makes them up as he goes along. She thinks he’s nothing but a scoundrel. He thinks she just needs to lighten up. They’re working together to tackle the out-of-bounds cases ordinary FBI agents can’t touch. And, their relationship? Well, there hasn’t been so much explosive chemistry since Nitro was introduced to Glycerin. Next on the docket: The mysterious disappearance of the Silicon Valley billionaire, known as the Big Kahuna. Kate’s been assigned to find him but no one seems particularly keen on helping. His twenty-six year old adult actress wife-turned Instagram model wife and his shady Czech business partner are more interested in gaining control of his company. For that they need a dead body not a living Kahuna. The only lead they have is the Kahuna’s drop-out son, who’s living the dream in Hawaii - if your dream is starting your day with the perfect wave and ending it with a big bowl of weed. To get close to the Kahuna’s son, Kate and Nick go undercover as a married couple in the big wave, bohemian, surfer community of Paia, Maui. Living a laid back, hippy-dippy lifestyle isn’t exactly in Kate’s wheelhouse, but the only thing more horrifying is setting up house with Nick Fox, even if he does look pretty gnarly on a longboard. If they don’t catch a break soon, waves aren’t the only thing she’s going to be shredding (or bedding).