The Path of the Lost 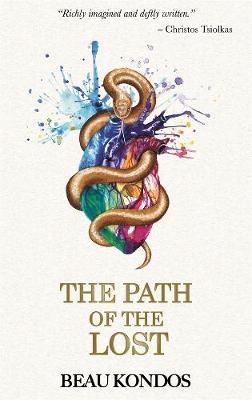 The Path of the Lost

Zynthia is a Delver of the Cosm, one of the last of her kind. She has the ability to unleash the power of art, melody and narrative in a world that has outlawed creative expression. After her grandmother’s death, she is left to Delve on her own in the hope of discovering a lost ‘key’ that could preserve the Cosm’s light and save her world from fading into oblivion. A single painting leads her to James, a man who is caught between two worlds.
After forming a fragile alliance with a Guardian and a rebel, Zynthia and James embark on the Path of the Lost. This ever-changing trail is haunted by forgotten creatures and secrets of the Cosm’s past. Is James really the key Zynthia has been searching for? Can he learn to harness the power of his art to help in the battle against the Lost? Or has Zynthia’s Delving initiated a chain of events that will plunge her world into darkness forever?
$19.99Add to basket ›

END_OF_DOCUMENT_TOKEN_TO_BE_REPLACED

THINGS THAT WILL NOT STAND