Thy Will be Done: The Conquest of the Amazon: Nelson Rockefeller and Evangelism in the Age of Oil 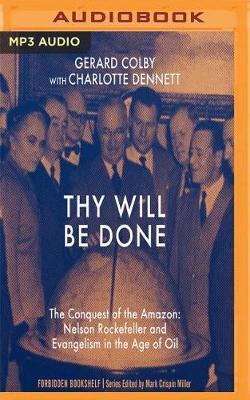 Thy Will be Done: The Conquest of the Amazon: Nelson Rockefeller and Evangelism in the Age of Oil

The United States' secret history of financial, political, and cultural exploitation of Latin America in the mid-20th century is revealed in this blistering expos , with a new introduction by the authors (Publishers Weekly). What happened when a wealthy industrialist and a visionary evangelist unleashed forces that joined to subjugate an entire continent? Historians Gerard Colby and Charlotte Dennett tell the story of the 40-year campaign led by Standard Oil scion Nelson Rockefeller and Wycliffe Bible Translators founder William Cameron Townsend to establish a US imperial beachhead in Central and South America. Beginning in the 1940s, future Vice President Rockefeller worked with the CIA and allies in the banking industry to prop up repressive governments, devastate the Amazon rain forest, and destabilize local economies - all in the name of anti-Communism. Meanwhile, Townsend and his army of missionaries sought to undermine the belief systems of the region’s indigenous peoples and convert them to Christianity. Their combined efforts would have tragic and long-lasting repercussions, argue the authors of this well-documented (Los Angeles Times) book - the product of 18 years of research - which legendary progressive historian Howard Zinn called an extraordinary piece of investigative history. Its message is powerful, its data overwhelming and impressive.