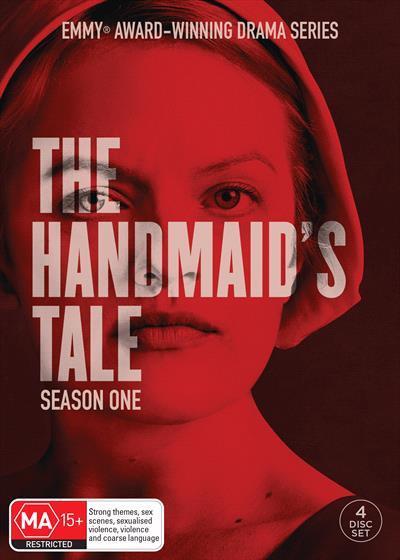 Adapted from the classic novel by Margaret Atwood, The Handmaid’s Tale is the story of life in the dystopia of Gilead, a totalitarian society in what was formerly the United States.
Facing environmental disasters and a plunging birthrate, Gilead is ruled by a twisted fundamentalism in its militarized “return to traditional values.” As one of the few remaining fertile women, Offred is a Handmaid in the Commander’s household, one of the caste of women forced into sexual servitude as a last desperate attempt to repopulate the world.
In this terrifying society, Offred must navigate between Commanders, their cruel Wives, domestic Marthas, and her fellow Handmaids - where anyone could be a spy for Gilead - all with one goal: to survive and find the daughter that was taken from her.
The Handmaid’s Tale received widespread critical acclaim and won eight Primetime Emmy Awards from thirteen nominations, including Outstanding Drama Series. It is the first series on a streaming platform to win an Emmy for Outstanding Series. It has also won Golden Globe Awards for Best Television Series - Drama and Best Actress for Elizabeth Moss who plays Offred.

Hulu’s elegantly produced adaptation of Margaret Atwood’s book of the same name, The Handmaid’s Tale has won a slew of awards, including the Golden Globe for Best Television Series and the Emmy for Outstanding Drama Series. Set in an all-too-plausible future where a political uprising has led to the creation of the Republic of Gilead – a deeply conservative police state where power and vice are shrouded in religion, and women of child-bearing age have been reduced to chattels bestowed on government officials – The Handmaid’s Tale is a frightening and deeply compelling examination of gender, class, corruption and misogyny.

The mini-series uses Atwood’s 1985 book as a leaping-off point, but delves deeper into the personal aspects of its source material, giving the story and characters a vitality and urgency that the (sometimes clinical) novel lacked. The novel was written in reaction to the election of Ronald Reagan and America’s conservative revival, but for this most recent adaptation the story has been cunningly adapted for the current political climate.

Flashback scenes set in the lead-up to the political uprising are bone-chilling, especially when viewed within the context of the rise of the alt-right, Trump’s war on reproductive rights, the recent women’s marches, and the #MeToo movement. With its stunning cinematography and sumptuous costume design, The Handmaid’s Tale is also a visual feast. The gorgeous production values and directorial design results in some of television’s most arresting moments, and the beauty of each scene works in direct counterpoint to the horror of the narrative. Starring Elisabeth Moss as Offred and Joseph Fiennes as the Commander, The Handmaid’s Tale is unflinching, powerful, heartbreakingly beautiful, and absolutely essential viewing.