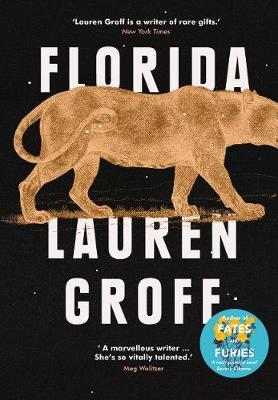 Lauren Groff is a writer of rare gifts, and Florida - her first new book since her ‘clear the ground triumph' Fates and Furies (Washington Post) - is an electrifying, expanding read.
Over a decade ago, Groff moved to her adopted home state of Florida. The stories in this collection span characters, towns, decades, even centuries, but Florida - its landscape, climate, history and state of mind - becomes their gravitational centre. Storms, snakes and sinkholes lurk at the edge of everyday life, but the greater threats and mysteries are of a human, emotional and psychological nature.
Groff’s evocative storytelling and knife-sharp intelligence first transport the reader, then jolt us alert with a crackle of wit, a wave of sadness, a flash of cruelty, as she writes about loneliness, rage, family and the passage of time. With shocking accuracy and effect, Groff pinpoints the moments and decisions and connections behind human pleasure and pain, hope and despair, love and fury - the moments that make us alive. Vigorous, startling, precise and moving, Florida is a magnificent achievement.

When I think of the American state of Florida, I think of Miami, Disney World, sun-drenched beach days and the Seinfelds living it up at Del Boca Vista. Florida, a new collection of short stories by Lauren Groff, presents us with a different side of the state, and it is certainly not of the sunshine variety.

Among the eleven electric short stories, Groff examines the state of Florida, which she now calls home and presents readers with tales of strangeness from the murky underground of the sunny state. Each story has a sense of dread, an almost expectant sense that something bad is about to happen right around the corner – or on the next page, as it were.

The main protagonist is Florida itself and the author weaves its presence in and out of the stories and captures its less visible other side, full of grittiness and struggle. In the last story, ‘YPORT’, my favourite, you can feel the humidity and desperation of a woman examining her looming future as a Floridian mother and wife. She decides to take her children to France, where she lived as a young student, in order to research the French writer Guy de Maupassant. She has already been stuck on this project for ten years.

There is also a strong presence of Mother Nature that hums through each story. It’s a clever way to remind and teach readers of the real-life threat facing Florida, with its rising sea levels and regular flooding.

If you loved Fates and Furies as much as I did (and remember it was Barack Obama’s favourite book!), then Florida will not disappoint you. Groff fans will immediately recognise her talent for stinging descriptions of characters, and for depicting the dread and loneliness of their lives. This collection is poignant and terrifying all at once.

Anna Rotar works as a bookseller at Readings Carlton.

The Largesse of the Sea Maiden