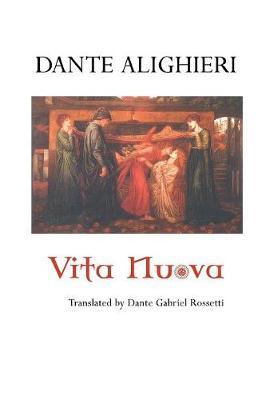 DANTE ALIGHIERI: THE VITA NUOVA Translated by Dante Gabriel Rossetti Edited by Cassidy Hughes Dante Alighieri’s Vita Nuova is his ‘Book of Memory’, the poetic account of his love for Beatrice Portinari. It is one of the great poetry books of love in world literature. This edition is translated by the celebrated Pre-Raphaelite artist Dante Gabriel Rossetti, with notes and introduction by Rossetti. The Vita Nuova or New Life draws on (and is part of) the dolce stil novo, the ‘sweet style’ of Italian poets such as Guido Cavalcanti, Guido Guinicelli, Cino da Pistoia and other stilnovisti. Dante was an admirer of love poetry (he praised Arnaut Daniel in the Divina Commedia). Among the influences on the Vita Nuova are, of course, the Bible (in particular the Psalms, the Song of Songs, Jeremiah’s Lamentations and Christ’s Passion). Other influences, apart from Classical thinkers, are Aelred of Rievaulx’s De spirituali amicitia, and Peter of Blois’s Deamicitia christiana. Classical and earlier writers whom Dante read included Cicero (De amicitia) and Boethius (De consolatione). The Vita Nouva, though, stands on its own in mediaeval literature. There is nothing else quite like it. Whereas Peter Abelard produced ‘passionate self-exculpation’ and Boethius was facing death, Dante wrote a creative autobiography, a record of his love and creative life up until the year 1294. Dante first met Beatrice at a party given by her father Folco Portinari, the Florentine banker, on Mayday, 1274. He was nearly nine; she was nearly eight. She was wearing a red dress, and was known as Bice, a shortened form of Beatrice. The Vita Nuova relates the Dante-poet’s experience of Beatrice in 25 sonnets, ballata, three canzoni and two incomplete canzoni consisting of one stanza and two stanzas in length. The Vita Nuova was the first book to link together poems and a prose commentary of an autobiographical and critical nature. The mixture of prose and poetry was known in mediaeval times as a prosimetrum narrative. Includes a gallery of art featuring Dante Alighieri, the Italian text of the poems, an introduction and bibliography. 208pp. www.crmoon.com